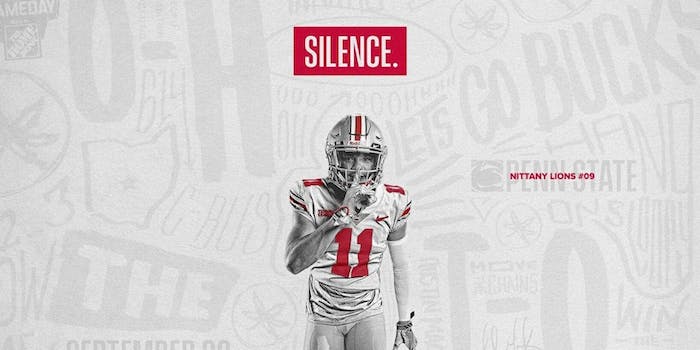 The tweet has been deleted among criticism that it was insensitive.

The Ohio State football program has been under a hailstorm of controversy for the past two months when it was reported that a former assistant coach had numerous alleged domestic violence incidents against his wife—and that Buckeyes head coach Urban Meyer knew about it and kept him on staff anyway. On Wednesday, the Ohio State football Twitter account tweeted an image that reignited the controversy.

Even if the since-deleted tweet was purely innocent and meant to reference only an upcoming football game, that’s not the way much of the internet is taking it. At the very least, people are slamming the tone-deaf nature of the social media post.

The tweet by the Ohio State football account that has 256,000 followers reads “silence the white noise.” The fact the word “silence” is displayed so prominently—and is how Meyer, who was suspended for three games because of his lack of actions regarding former receiver coach Zach Smith, reacted to the situation—drew derision on Twitter.

It references Saturday’s football game between the Ohio State Buckeyes and the Penn State Nittany Lions, a contest between two of the best teams in the country. In Happy Valley, the home of Penn State, the program is calling for a White Out, where the 100,000 fans in attendance are asked to wear white to create a harrowing atmosphere in the stadium for the visiting opponent. The tweet sent from Ohio State seemingly was meant to somehow counteract that homefield advantage.

you guys are pretty good at silence.

What the hell? How stupid can they be? https://t.co/FzU6jMUtHA

maybe not the move right now y'all https://t.co/WBsAZhMK9s

It also acknowledged the situation on Twitter, though it deleted the apparent apology on Thursday: “We understand why people were critical.”

The Ohio State football twitter account tweeted a statement regarding the “Silence” poster, but it’s since been deleted. pic.twitter.com/TSrgk1hO7b

Maybe the tweet was insensitive, and maybe it was unintentional (that’s basically what the ESPN reporter intimated). But one of the most well-known and well-regarded sports information offices should know better. Hopefully next time there’s a big game coming up, it won’t be quite so tone-deaf.