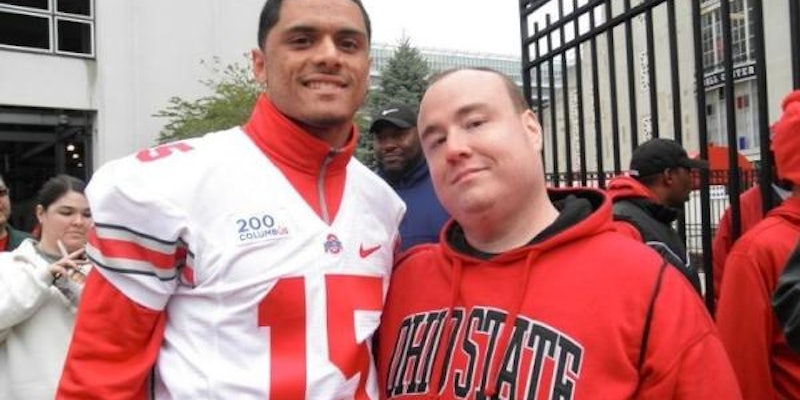 An Ohio State University athletic director asked his players to block the advances of an alleged sex offender on Facebook and Twitter.

An Ohio State University athletic director has a message for his student-athletes: Block that convicted sex offender following you around on Facebook and Twitter.

In an email to student-athletes obtained by the Ohio State student newspaper The Lantern, Associate Athletic Director Doug Archie wrote, “The University has become aware that an individual who is listed on Kentucky’s sex offender registry has recently been seen in pictures with our student-athletes.” He linked to a 2008 news story of a Kentucky man, Charles Eric Waugh, who was arrested for five counts of possession of child pornography.

Waugh reportedly uses the Twitter handle @BdubsTriviaGuru. That account doesn’t provide a name, but it frequently posts photos of a man who strongly resembles Waugh from his mugshot, including a recent one where he stands with OSU wide receiver Devin Smith.

@BdubsTriviaGuru seems primarily concerned with OSU football and inspirational quotes. “The harder you work, the harder it is to surrender. – Vince Lombardi,” he tweeted on May 3.

On Thursday, @BdubsTriviaGuru posted a string of follow requests to over a dozen current players and high-school prospects. According to his own tweets, Twitter had marked @BdubsTriviaGuru’s previous account as spam, so he wanted to start sending the quotes to each of them individually by direct message. His targets included at least one high-school junior committed to playing at a different college.

Seriously, the last thing Ohio State needs is another scandal.