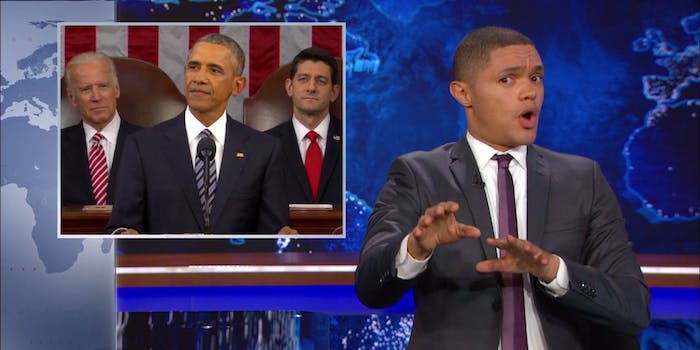 The president threw a lot of shade in his speech.

President Obama’s final State of the Union address covered a vast range of topics, but it might be best remembered for the sick burns he delivered.

The president’s “subtweeting”—calling out people without naming them, especially as practiced on Twitter—was in rare form on Tuesday night. With the entire country (and much of the world) watching, his targets just had to take it until the speech ended—especially if they happened to be in the same room as the president. And on Wednesday night, The Daily Show‘s Trevor Noah is on-hand to decode all of them.

Between Ted Cruz’s carpetbombing comment, climate change deniers, and a leading Republican presidential candidate’s Islamophobic rhetoric, Obama had plenty of targets to hit. And as Noah showed, he got them all good—even if they later denied it.