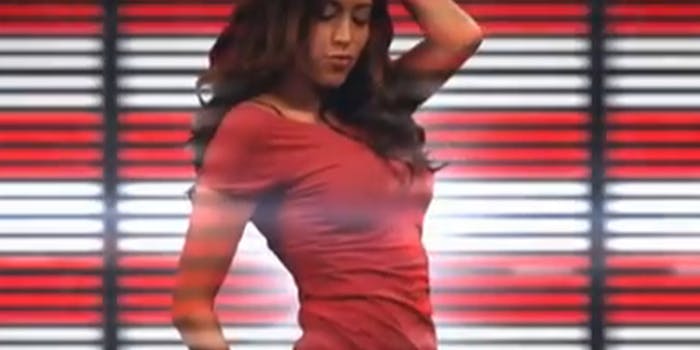 Catching up with Obama Girl

Even as the presidential race heats up, Amber Ettinger—better known as Obama Girl—is moving away from the role that made her Internet famous.

Amber Ettinger is singing a different tune these days.

Earlier this year, she made her latest appearance as Obama Girl in a Grease parody called “Glease.” Joined by Barack Obama impersonator Iman Crosson, Ettinger, as Sandy, tells the president he needs to “step up” if he wants her vote this election—to the tune of “You’re the One That I Want.”

Ettinger is as conflicted as her online persona this election cycle. After years of playing Obama Girl on YouTube, she’s moving away from the role that made her a catapulted her into the national spotlight in the last presidential race.

To quickly recap, Barely Political’s Ben Relles and Leak Kauffman got in contact with Amber Ettinger and asked her to take part in their latest video about then-Senator Barack Obama in 2007.

“I really thought it was a really funny concept and [that] Obama was a cool guy, charismatic, smart, intelligent,” Ettinger told the Daily Dot. “I was like, ‘Yeah, sure I’ll do this.’”

The result was a small video called “I Got a Crush on Obama.” Jake Tapper of ABC News blogged about it a couple days after the video’s release, and the rest is Internet history—to the tune of 25 million views.

“Next thing you know my house phone was ringing off the hook and it just went completely viral and people talk about it to this day,” Ettinger said.

Ettinger made more Obama Girl videos during the 2008 presidential election and made appearances at the CNN/YouTube debates, the White House Correspondents Dinner, the Democratic National Convention, and even a cameo in a Saturday Night Live sketch.

But for Ettinger the biggest reward was the positive feedback.

Since the last election Ettinger has kept herself busy. She just wrapped filming for An American in Hollywood, acted in numerous commercials, became a correspondent for WPIX in New York, and hosted a gossip show on HDNET. She also became a fashion correspondant on YouTube, a move that ties in nicely with her new jewelry line.

“The exposure was the most beneficial part [of Obama Girl] because it opened doors for me in my acting career,” she said.

More recently, Ettinger helped inspire Obama Boy, a character played by Justin Brown and created by John Duarte after Obama announced his support of gay marriage. Duarte’s version of “I’ve Got a Crush On Obama” debuted on YouTube last month and went viral within a few days.

Politico has hinted that they are interested in a collaboration between Obama Boy and Obama Girl, but Ettinger isn’t planning another Obama Girl video for the foreseeable future. However, she said she would like to eventually get out there and see how young people feel about the candidates this election and possibly post more videos to YouTube.

“YouTube is great because you can create all your own content and collaborate with other YouTubers and your videos can be seen by millions of people,” she said. “That opportunity was not available just a few years ago.”