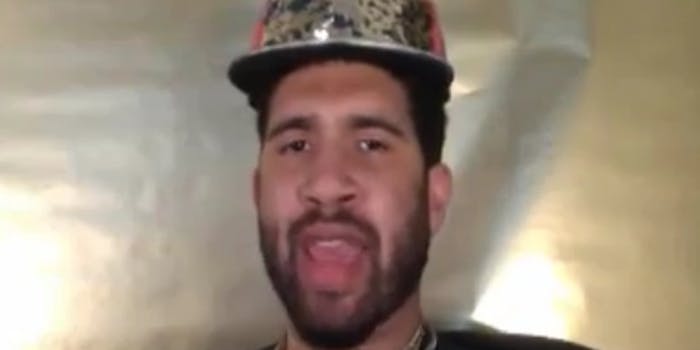 Hennessy Youngman’s NSA mixtape is the soundtrack for paranoia

This might be the first time J. Edgar Hoover and Eric Holder are both mentioned in a mixtape.

Hennessy Youngman is the alter ego of New York City artist Jayson Musson. His mixtape series, “CVS Bangers,” is an expertly woven tapestry of rap horn, gunshot samples, distracting mixtape shout-outs, and songs you might hear while shopping at CVS. (You haven’t lived until you’ve heard “Lady in Red” with rap horn.) Once upon a time, he also hosted an excellent YouTube series called Art Thoughtz.

His latest mix takes on a timely topic: the National Security Agency. Over on his Soundcloud, he explains why the jam, titled “NSA Bangers,” is so necessary:

“NSA BANGERS is an audio landscape full of paranoia, espionage, epic snooping, unhealthy obsession, and the stress of being a contemporary type human being. Basically, NSA BANGERS is the soundtrack of Freedom! And Freedom is expensive y’all! Apparently, it like, costs your Freedom!”

This might be the first time J. Edgar Hoover and Eric Holder are both mentioned in a mixtape. “NSA Bangers” also samples Queen and David Bowie’s “Under Pressure,” Geto Boys’s “Mind Playing Tricks on Me,” and Hall & Oates’s “Private Eyes,” which is, amazingly, improved upon with a well-placed rap horn sample.