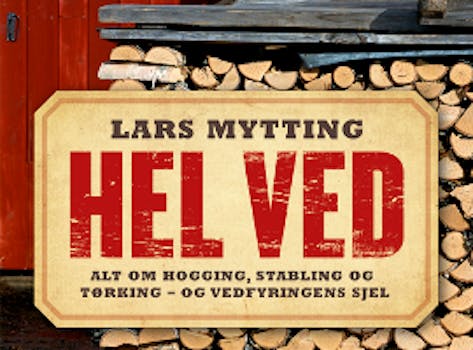 Norwegians will gather around their TVs tonight to watch 12 continuous hours of fireplace footage. It's being described as "slow, noble television."

We’ve seen some hardcore fans in our time, but this weekend, residents of Norway will show us their devotion to the hottest fandom of all: firewood.

If you think of Scandinavia, you might think of hearty rusticity and elegant taste, so it’s fitting that starting tonight, Norwegians are treating themselves to both on prime time, when a twelve-hour series featuring a slowly burning fireplace airs on public broadcasting, complete with thrilling commentary by a panel of expert firewood enthusiasts.

“It will be very slow but noble television,” producer Rune Moeklebust stated. You might think of it as putting the Twin Peaks into Scandinavian rural living.

Apparently Norwegians really love their firewood. The hottest book in the country right now, second only to Fifty Shades of Grey, is a book analysing the meaning and culture of firewood entitled Hel Ved, a pun comparing firewood to primal strength or the salt of the earth. From Norway News:

“He [author Lars Mytting] has hit upon the deepest structural core of the Norwegian people: The desire for self-sufficiency, combined with coziness around the fireplace,” researcher Jørgen Lortentzen told newspaper Aftenposten recently. “I think there’s a surprising number of Norwegians who have a saw standing by, and when you peek around people’s properties, you’ll find lots of stacked firewood.”

Tonight’s broadcast will be all about how-to guides for fireplace n00bs, from cutting and stacking tips to “cultural segments with music and poetry,” according to Moeklebust.

Norwegians have always had a special relationship with fire, from before that time the mythical trickster Loki stole fire from the Frost Giants. Alas, that part didn’t make it into Thor.  The network is predicting that thrill-seeking citizens of Norway will be tuning in even on a Friday night to watch the drama unfold and the cinderblocks crackle.

Considering that 3 million people apparently once tuned in to the same network to watch a 134-hour boat ride, and a seven-hour train ride before that, the network may have a point.

But will a simulated block of firewood really have the same pull with viewers? We’re alight with curiosity. (Sorry.)

No matter what, we hope there’ll be a spate of lethargically pleasing Tumblr GIFsets for everyone to curl up to—preferably without danger of smoke inhalation.