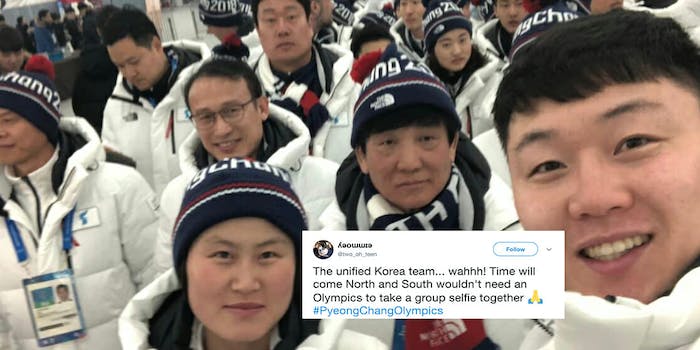 North and South Korean athletes take selfies together at the Olympics

Despite the vast political divides between their countries, North and South Korean athletes are coming together for the sake of the Winter Olympics—and the visual evidence so far is heartwarming.

Photos posted on social media show athletes from the two countries cheesing at the camera together.

In one picture, the unified Korean team—which will share locker rooms and practice space—pauses for a group selfie. The athletes’ blue and white uniforms represent the Korean unification flag.

“Time will come North and South wouldn’t need an Olympics to take a group selfie together,” the caption says.

“With my bro up from north woo hoo let’s go!” Kam wrote.

The Toronto Star reported that after they trained together earlier in the week, Kam called his North Korean teammate “hyeong,” a term used to refer to an elder brother or friend.

“I said something like ‘Hey, Ju Sik hyeong, let’s take a photo together!’ ” Kam said. “I posted that photo for fun… and to mark the Olympics.”

The symbols of unity between the two nations go beyond selfies. The New York Times reported Friday that during the opening ceremony, North and South Korean athletes marched together under the unified flag, a moment that was “moving” to many spectators.