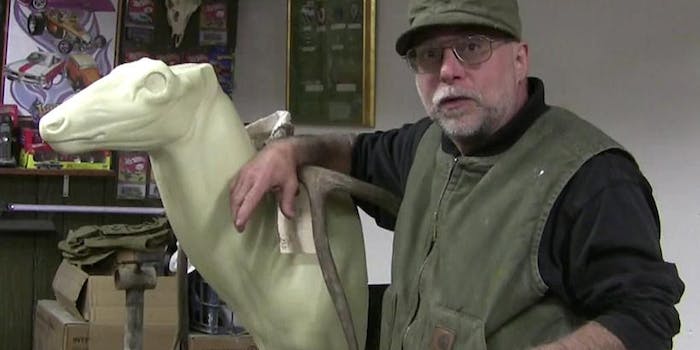 Chuck Testa may be the most famous taxidermist on the Internet, but "I've still got to pick up the dog crap,” he tells the Daily Dot.

You may have thought that a professional taxidermist wouldn’t have a chance at fame. Nope, Chuck Testa.

Made famous by filmmakers Rhett & Link, the 56-year-old Californian has yet to come down from his streak of success.

Since his five-month-old taxidermy commercial went viral on YouTube, Testa has been invited to speak at ROFLCon this May, his online store is thriving, and in the next few weeks he will be lecturing at Santa Monica College on anatomy.

While people certainly notice him a lot more around Ojai Valley, Testa still considers himself a normal guy.

“Around home I’ve still got to pick up the dog crap,” he told the Daily Dot.

“My celebrity status doesn’t help at all. It’s been the time of my life. I’m so grateful.”

Before Christmas, Testa travelled to Rhett & Link’s studio in Northern California to shoot “Dope Zebra,” a short video where two people in a zebra costume dance in a backyard to some funky techno music. In just five short days, the video has collected 1.3 million views and more than 5,000 comments.

“It was a lot of fun,” said Testa, who wouldn’t reveal whether he was one of the people dancing in the costume. “It’s a lot like being in the Army—hurry up and wait.”

Testa said it was too early to tell how his new found Internet fame has affected business, but he believes it has picked up greatly. Since his commercial went viral, Testa has created more than 10 taxidermy videos showing people such skills as how to skin a skull, mount a deer head, and make glue. (Warning: these videos are rather graphic.)

Testa hopes his videos prove that he’s the real deal and encourage people to pursue trade professions like taxidermy.

“It makes me feel like that still in America you can accomplish anything even if you don’t have an education,’” Testa said. “It’s the ultimate validation.”