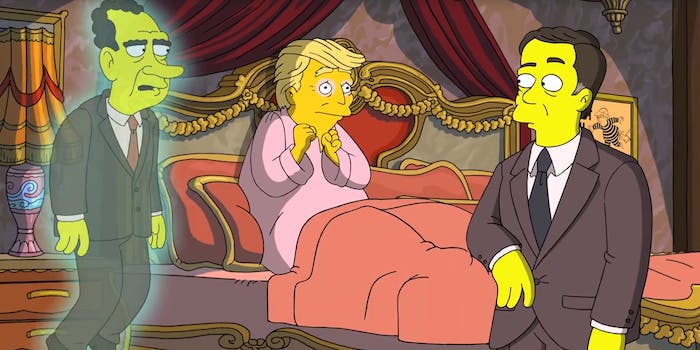 ‘The Simpsons’ haunts Trump with the ghost of Nixon

'The Simpsons' is back for more.

The Simpsons marked President Donald Trump’s first 100 days with a grimly satirical clip, but continued chaos in the White House has the venerable cartoon back for more.

In the new clip, The Simpsons‘s animated Trump sits down with former FBI director James Comey to make a deal to erase tapes that Trump quickly insists do not exist. At the mention of tapes, the lights flicker and the ghost of former President Richard Nixon appears.

125 Days: Donald Trump makes one last try to patch things up with Comey.

Nixon’s suggestion for Trump: “If you have tapes, burn ‘um!” The punches come fast in the clip, uploaded to The Simpsons Facebook page on Friday. Jeff Sessions scurries out from under Trump’s bedsheets, White House staffers—including Steve Bannon—have apparently hanged themselves, and books on Trump’s bed jab at Bill O’Reilly’s firing and Trump’s two scoops of ice cream. (Come on, Simpsons writers, we all know Trump doesn’t read books.)

The one part of the clip that doesn’t seem to be a joke is what Comey says when Trump asks him for advice. “Start hanging out with people who are more honest than you.”