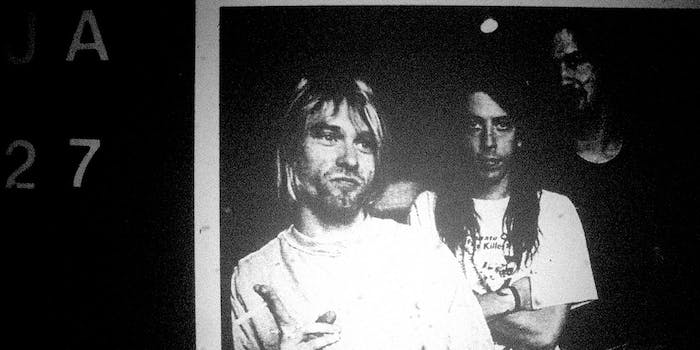 One of many treasures hidden within the new Nirvana documentary Montage of Heck is a wealth of previously unreleased tracks and demos. Today, another one of those songs has been released into the wild.

“E-Coli” is a “jam” in every sense of the word. The plodding, nine-minute track sounds a bit more like pre-Nevermind Nirvana, or perhaps something that could have crawled off Incesticide, though it’s pegged to be from 1993 or ’94.

Speaking with the Daily Dot after the SXSW debut, Montage director Brett Morgen said he hoped to release more of the discovered tracks featured in the film over the summer. It’s not clear if he posted this song; the YouTube description says it was uploaded anonymously to Reddit. There’s also the theory that viral video star Dave Grohl is a potential source of leaks, which has been denied by his management.

Morgen also spoke about how Kurt Cobain‘s wife, Courtney Love, and daughter, Frances Bean, offered him access to the storage unit that housed a box of 108 cassettes, which formed the foundation of the film:

There was all this incredible spoken word and his audio autobiography of his youth. His cover of the Beatles’ ‘And I Love Her.’ Just this incredible stuff that really, to me, is what elevated the film, because Kurt was an artist first. And like all artists, he left behind this autobiography in this life. The fact that he worked in both visual and oral media meant it was one of the most complete visual and oral autobiographies.

On Friday, a few days after Frances Bean’s 23rd birthday, Love posted a touching message on Instagram. Which, of course, trolls wasted no time picking apart.

Makes me feel so sad. Our baby is all grown up now. Jesus Kurt look at her face, what on earth were you thinking..⁉⁉ God I miss you, we all miss you #family #memories #turnbacktime #lovehim

Between this and the September reissue of a Bikini Kill demo, 15-year-old me is screaming.