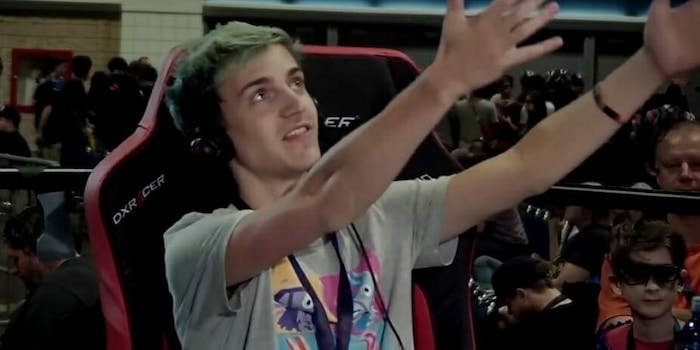 Here’s just how ridiculously popular Ninja is on Twitch

He hasn't had a perfect 2018. But people can't stop watching him.

Ninja is the most popular Twitch streamer on the platform. While that might seem obvious—he’s really the only Twitch user to cross over into mainstream success—it’s astounding just how much people watch him compared to the rest of the website.

According to the Esports Observer and TEO Analytics, Ninja accumulated 226.85 million viewed hours, more than twice as much as the next two most-popular channels on the platform (and more than three times as much as No. 1 Twitch channel from last year).

Riotgames—which was the second most-watched channel—recorded 99.31 hours, and Shroud accumulated 97.07 million. Together, they combined for 196.38 hours, more than 20 million less hours than Ninja, aka Tyler Blevins. Last year’s No. 1 channel, Summit1G, had 72.45 million hours in 2017.

“These numbers from Ninja are downright astonishing, and significant also because Overwatch League, for example, signed a 2-year deal with Twitch to air exclusively on the streaming service for $90 million,” wrote Forbes. “Ninja, in a recent tweet, wondered what his own audience might be worth given that he put up triple the numbers of that entire league … Would Amazon/Twitch throw $90 million at Ninja to make sure to keep him on the platform for a few years? Would Google offer him $120 million if he switched to YouTube gaming?”

Despite his overwhelming success, Ninja hasn’t had a perfect 2018. He was criticized for sexism for saying he wouldn’t play with female gamers. “Even if there’s a hint of flirting, that is going to be taken and going to be put on every single video and be clickbait forever,” the married streamer said at the time.

In March, he apologized for using a racial epithet when he was gaming.

Through it all, though, Ninja said earlier this year that he makes $500,000 per month for playing Fortnite. Though it’s far less than what the top YouTubers earn, it’s still a nice way to earn a living. Here’s the rest of the top 10 most-watched Twitch channels.