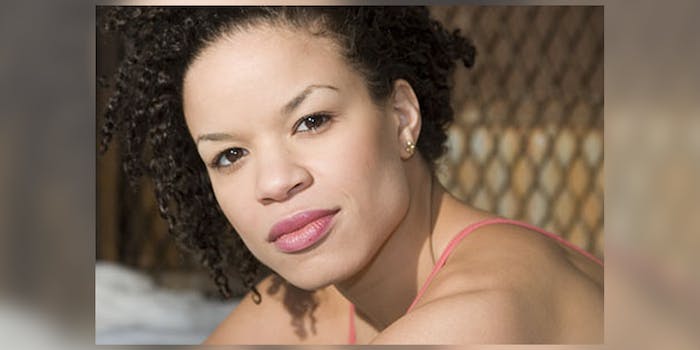 Nicolle Rochelle had a message for Cosby.

Bill Cosby‘s retrial kicked off on Monday morning with its share of protesters, including a former Cosby Show actress who was arrested for a topless protest.

The woman, identified as Nicolle Rochelle, reportedly ran into a crowd of bystanders outside the Montgomery County Courthouse in Norristown, Pennsylvania, and jumped a barricade as Cosby walked into the courthouse. The names of women who have accused Cosby of assault were written on her torso, as was Femen, the activist group, which gave her a nod on Twitter.

Rochelle was arrested and charged with disorderly conduct, according to the Montgomery County District Attorney. According to the Associated Press, after her release, she said: “The main goal was to make Cosby uncomfortable because that is exactly what he has been doing for decades to women and to show him that the body can be aggressive and empowered.”

#FEMEN activist faced Bill Cosby as he walked into a suburban Philadelphia courthouse Monday for the start of his sexual assault retrial. Her body was covered with the names of the victims. We demand to convict #Cosby the Rapist! #BillCosby #BillCosby #metoo   #timesup  #femen pic.twitter.com/TAFDxbADVT

Rochelle, who also goes by the stage name Nicole Leach, appeared in four episodes of The Cosby Show in the early ’90s. She posted a photo to Facebook on Monday, reportedly in front of the house where the show was filmed. She has not publicly accused Cosby of assault.

Another woman who starred on the show in the early ’90s, Lili Bernard, was also in attendance on Monday. In 2015, she accused Cosby of drugging and raping her when he was mentoring her for a starring role on the show.

Cosby’s 2017 sexual assault trial ended in a mistrial. As this retrial is happening in the era of #MeToo and Time’s Up, the prosecution is hoping for a different outcome; potential jurors were even reportedly asked what they thought of the #MeToo movement. The judge has allowed five additional women to testify in the retrial, instead of the previous trial’s two. Cosby has been accused of assault by more than 50 women.