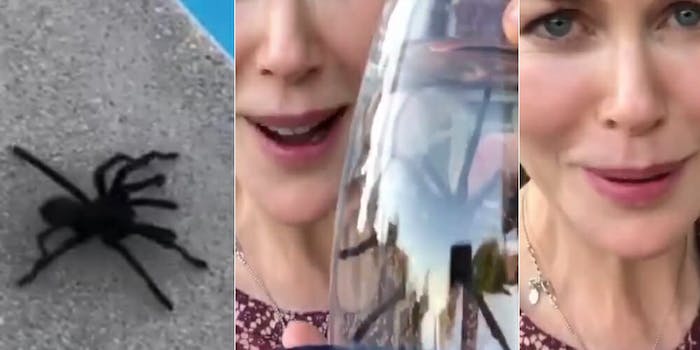 The Aussie star has nerves of steel.

Nicole Kidman is a leading actress and mother, and sometimes the second job requires nerves of steel. The veteran Australian actress and mom of four displayed both skills after a massive tarantula showed up near her swimming pool on Sunday.

Kidman played it calm and relaxed while collecting the arachnid and posted the ordeal to Instagram.

Kidman’s kids can be heard in the background losing their damn minds while the Big Little Lies star giggles slightly then captures the intruder under a glass. Kidman commented that the spider was released back into the world “unharmed and healthy” and hopefully 100 miles away from the family property. She owns homes in Los Angeles and Nashville with husband Keith Urban, though it’s unclear where this Instagram video was filmed.

After securing the tarantula under a cup, she pleas for “help” from her 1.5 million Instagram followers, though it feels more like she needs assistance with the freaked-out kids and not the gross-ass spider.

Kidman will star in Aquaman later this year.