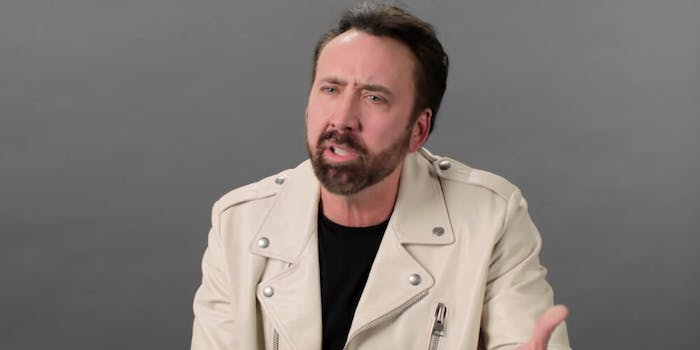 'John Wick' but make it Nicolas Cage and pig.

Nicolas Cage continues to prove he is the artistic voice of our time. In his next project, Cage will rescue a kidnapped pig.

Collider confirmed that in the upcoming independent film Pig, directed by Michael Sarnoski, Cage will play “a truffle hunter who lives alone in the wilderness of Oregon with his beloved foraging pig. When the pig is kidnapped, he must journey into Portland—and his long-abandoned past—to recover her.”

The film went into production last week, continuing Cage’s strange streak that has shaped his career in recent years.

In 2018, Cage received lots of attention for his wild turn in Mandy, and this year, he has a project where he plays a big game hunter called Primal and a film where he contends with the fallout of a meteorite striking a town called Color Out of Space headed for release.

In Pig, Cage will star alongside Hereditary’s Alex Wolff. The film will be Sarnoski’s first feature, and he also served as the writer on the project.

Laugh if you want, but it’s hard to think of a more surefire green light pitch than “John Wick but make it Nicolas Cage instead of Keanu and pig instead of a dog.”