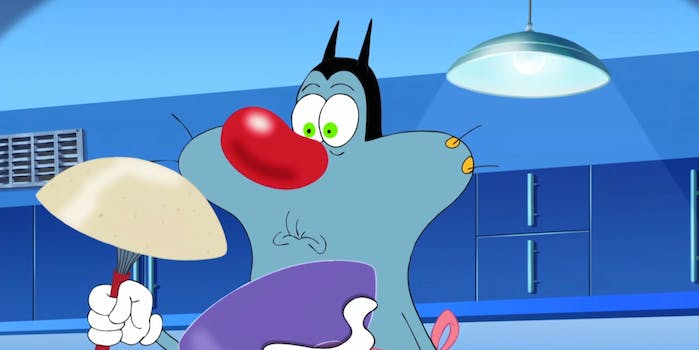 Nickelodeon pulled this cartoon after a kid spotted boobs in it

They're hard to miss.

Nickelodeon pulled an episode of the French cartoon Oggy and the Cockroaches after viewers spotted a pair of exposed breasts in the background of the cartoon.

The episode in question, “(Un)happy Camper!,” aired on March 5 and featured the titular cockroaches planning to ruin a beach vacation in a camping car. At one point, the camping car shows a photo of a woman with her breasts exposed before Oggy opens the door of the camper and covers it.

It’s not a talking point within the episode itself, but it is on screen long enough for viewers to take notice—plus, in this clip, there’s an arrow and a “ding” sound effect.

According to TMZ, one father was “extremely unhappy” now that he had to have a talk with his 8-year-old son about female anatomy after he had seen the episode.

Nickelodeon has yet to publicly comment on the episode, but it’s since removed it from its schedule and website. It’s still viewable on a cached version of the page.

Oggy and the Cockroaches has been running intermittently since 1998 in France. It used to run on Fox Kids and Fox Family in the U.S., and Nickelodeon has aired the show in the U.S. since Feb. 23.