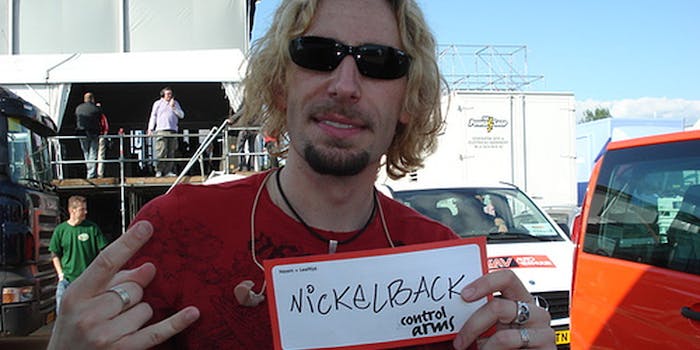 Thanks to a new Web plugin, you'll never have to read about Nickelback again (so finish this article while you still can).

Despite an online petition that’s garnered more than 40,000 signatures, Nickelback will still be providing the halftime “entertainment” during the Detroit Lions’ game on Thanksgiving.

At least now there’s a way to at least block Nickelback—the most offensive word not banned in Pakistan—from appearing in your Web browser.

Available for Firefox and Chrome from AUX Labs, Nickelblock is a plugin that promises to censor and eliminate all mentions of the Canadian hard rock group on sites that you visit online.

The program is a modified version of the Free Art and Technology Lab’s  Shaved Bieber project, which clipped unwanted mentions of the teen idol. That company also produced  Lowercase Kanye, a code that autocorrected the rapper’s infamous CAPS LOCK tirades, and is currently campaigning to Occupy the Internet.

Nickelblock, however, is the best spin-off yet and arguably coolest music program to hit the Web since Drinkify, which vigorously shakes bands into classic cocktails.

What does that site suggest for “The Nickelback”? Two oz. of Jack Daniel’s Tennessee Whiskey and Worcestershire sauce with 10 oz. of Laphroaig Scotch.

If only the band’s music was that easy too swallow.