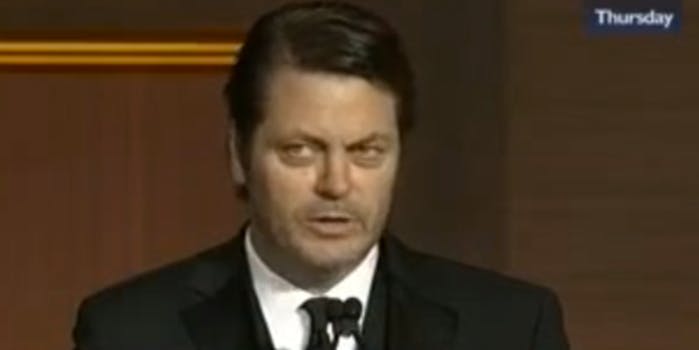 Nick Offerman, the brilliant comedian who plays the small government-loving, furry mustache-having, oak-cutting Ron Swanson on Parks and Recreation, showed up at the Radio and Television Correspondents’ Association Dinner on Thursday night. In front of Washington D.C.’s media establishment, he decided it was the perfect time for a lecture on the toxic realities of D.C., the ramifications of gun legistation, and a brief Bill of Rights refresher course.

The correspondents’ dinner has a long, beautiful tradition of comedians taking D.C. to task. Most memorably, Stephen Colbert’s 2006 roast of the capital set the bar high for all who followed.

By the way, if you’re missing Offerman’s trademark mustache during his remarks, it’s only temporarily missing. The furry thing has better representation, the actor explained, so it’s currently involved in a soda ad campaign down in Brazil during the World Cup.