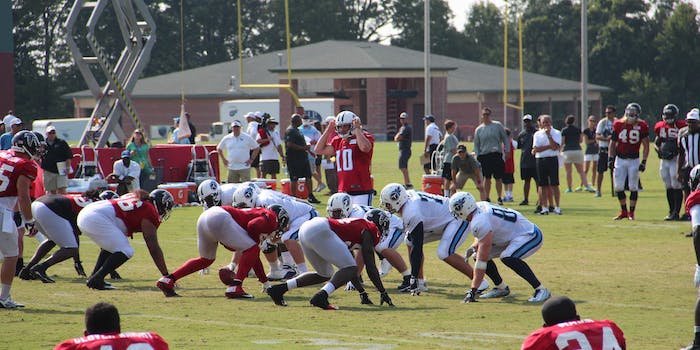 If you're looking to Periscope for your NFL practice coverage, don't waste your time.

With the NFL offseason ramping up and teams participating in workouts and mini-camps in preparation for the 2015 regular season, here’s a reminder of where the league stands on the newest forms of social media.

Alas, the idea of using Periscope to broadcast a practice or, at the very least, specific drills featuring different position groups might be fascinating for a fan to experience.

But, with the exception of some preseason practices in August, NFL practices are closed to the public (even the media covering the practices are usually prohibited from livetweeting the proceedings), and they’re closed off to the public for a reason. It’s because football coaches are some of the most paranoid people you’d ever meet, and the idea of allowing anybody they don’t know to watch a team prepare would be mind-boggling.

For now, anyway. Perhaps in the future, the NFL could be convinced that Periscope could enhance a fan’s experience without compromising a team’s ability to get ready for a game.

Either way the question of Periscope for sporting events isn’t going away. While HBO and Showtime and anybody associated with the Floyd Mayweather–Manny Pacquiao boxing match earlier this month did all they could to shut down anybody with a Periscope account from broadcasting the fight—it didn’t exactly work—it seems likely that these kind of livestreaming apps will continue to make life difficult for professional sports leagues.

“We’ll spend some time this offseason evaluating the technology and how it applies to us and continue to closely monitor how the industry and how other sports leagues are handling them,” an NFL spokesperson told the New York Daily News earlier this month.

While the NFL has a few months to determine its next step forward, the hockey playoffs and baseball’s regular season are ongoing, and though it seems that anything broadcast on free TV or basic cable, where most NFL, MLB, NBA, and NHL games reside, wouldn’t be threatened too badly by Periscope—why would somebody want to watch on the Periscope app when it’s relatively inexpensive to watch it on TV?—that might not actually be the case.

“This is a concern for our business overall,” a network industry source told the Daily News. “It’s a concern for every grip, every lighting director, all the way up to the CEO of the company. This could be a Napster-type of thing. It’s going to evolve. It’s troubling, because you don’t know where it’s going to go.”