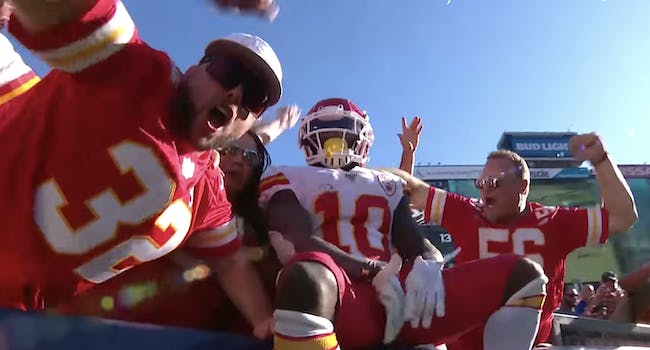 Monday Night Football: How to stream Chiefs vs. Chargers live

Monday Night Football lights up with this traditional divisional rivalry.

Both the Kansas City Chiefs and the Los Angeles Chargers have been disappointing in recent weeks. For the Chargers, this means that their season is essentially over. In Kansas City, a once-dominant unit seems to be fading back into the pack.

The Chiefs still look like a playoff team, but their recent loss to the Titans was troubling. With Mahomes back in the line-up, KC looked like they were going to destroy a middling Tennessee team. Instead, Derrick Henry ran all over them for 188 yards and two touchdowns.

Similarly, the Chargers looked poised to get back in the hunt after stunning the Packers two weeks ago. Instead, they lost to the Raiders, and lost more ground in the AFC West.

Though Los Angeles has played better on both sides of the ball recently, it hasn’t been enough. A lack of defensive depth and Philip Rivers’ age have proven costly in close games.

It’s probably too late for the Chargers to work their way back to the playoffs unless they win out. But they could spoil things for this sagging Chiefs team if things go their way. Here’s everything you need to know to live stream Chiefs vs. Chargers, including what to watch for on the field.

Chiefs vs. Chargers live stream: How to watch MNF online

Kanas City Chiefs vs. Los Angeles Chargers stream: What to watch for

For so much of the season, the AFC West seemed like it was the Chiefs at the top and everyone else fighting for scraps. Now, the picture isn’t so clear.

As the season has gone on, the Raiders have played better while the Chiefs have had some head-scratching losses. Though you don’t expect the Chiefs to lose another one here, you didn’t expect them to lose to the Titans either.

It’s troubling that Patrick Mahomes can throw for 446 yards and three touchdowns and KC can still lose. Though this defense has improved to eleventh in DVOA, running backs have a way of beating them down. They also have a tendency to give up a lot of points despite their decent ranking.

You may not notice it in the box score, but the Chiefs’ O-line is shaky. That means that while the offense piles up yards, they are often in precarious situations. Mahomes doesn’t really turn the ball over, but a line starting two backups has led to an uptick in incompletions.

Finally, this special teams unit has been mistake-prone, putting the offense in tough situations. The other units need to perform better if these dynamic Kansas City weapons are going to be effective.

Despite all of these issues, the Chiefs are still better than the Chargers. There have been things to like, such as the amazing defensive play of Joey Bosa and Melvin Ingram and the improved running of Melvin Gordon. But Philip Rivers looks old and is turning the ball over too much behind a bad offensive line. Offensive tackle Trent Scott is so bad, fans curse his name on a weekly basis. And if you turn the ball over, you lose.

Kansas City has too many weapons to come into this game as anything but the heavy favorite. Andy Reid will look to clean up the mistake-prone aspects of this team so that Patrick Mahomes can lead the team to victory. Expect the Chiefs to get it together and reclaim dominance in the AFC West.