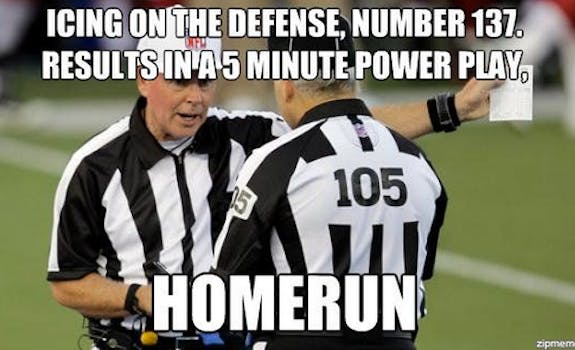 These memes might make you laugh or cry, depending on whether or not you're a Green Bay Packers fan.

The NFL has transformed into the “no fair league” thanks to the terrible calls from the replacement referees.

With blown calls, cheap hits, and games spoiled, it’s as if Vince McMahon’s failed stab at a professional football league, the XFL, has became a reality.

The trying circumstances came to a head in Sunday night’s game between the Green Bay Packers and the Seattle Seahawks, when a game-deciding interception was ruled a touchdown for the Seahawks. The call sparked

The call sparked an outraged tweet from Packers guard T.J. Lang and prompted one state senator to tweet the NFL commissioner’s personal information.

ESPN is reporting that an agreement between the league and refs to end the lockout might be reached before this Sunday’s slate of games.

Although fans might be pleased the refs are back, it would signal the end of the entertaining memes distressed football fans have created. The image macros, most of which have been making the rounds on Facebook, poke fun at the ref’s lack of sports knowledge and overall stupidity.

Here are our 8 favorite refer-memes.