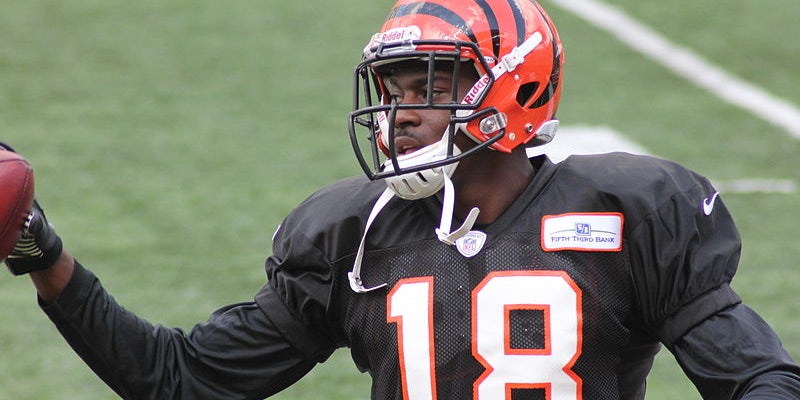 Sleeper picks, trade talks, and cheap tricks to keep in mind for Week 5.

It’s October and mild cold fronts are slated for most of the country this weekend. It’s time to monitor weather reports in rust belt towns. For Midwestern outdoor stadiums that harbor West Coast offenses, making sure sailing is smooth is just as important as checking in on Hakeem Nicks’ knee during weekday morning coffee breaks.

Case in point: On Dec. 16, 2007, The Ramóns VI needed but a pedestrian, warm body performance from Derek Anderson to win a substantive chunk of change. I remember wearing cargo shorts and flip flops to my favorite Central Texas wings eatery—Plucker’s on South Lamar in Austin—and losing my lunch upon seeing Anderson’s Siberian conditions. There’s no excuse for that sort of managerial oversight.

The best fantasy offenses stem from middle of the road teams (check), with a rock solid running game (BenJarvus Green-Ellis) and breakout candidates (Cincinnati harbors two). A.J. Green is one of the most targeted receivers in the league and has the skill set and frame to run the league alongside Calvin Johnson. (Both have 43 targets, but Green went four rounds later.)

Second-year quarterback Andy Dalton was never a scoreboard fireworks guy at TCU; he was more of the Russell Wilson-model of leadership and management. He’s passed for more yardage than Aaron Rodgers this season and his upcoming fall schedule features the suspect secondaries of the Dolphins, Browns, Chiefs, and Raiders. Even the deep guys—speedster rookie Armon Binns and Andrew Hawkins—have fantasy value.

The discernible best practice for draft night was stockpiling running backs early—even if that meant Chris Johnson, Matt Forte, and Steven Jackson—securing an elite quarterback, drafting two sleeper tight ends, and waiting on receivers. From Greg Jennings and Larry Fitzgerald to Dez Bryant and Wes Welker, headliner names have struggled. More importantly, the NFL’s pass-happy approach has meant invaluable cheap labor. Brian Hartline is the NFL’s leading receiver and nobody drafted him. Danny Amendola isn’t far behind. Wide receivers like Arizona’s Andre Roberts or Green Bay’s James Jones are going to win owners lots of money, and it started in August with their fundamental team-building structure.

Nine of the NFL’s top 20 leaders in receiving touchdowns are tight ends. The Rob Gronkowski hybrid model of linebackers with hands, operating in two-tight end packages is the all the rage. That’s great for athletes like Kyle Rudolph and dudes like Heath Miller and Scott Chandler who have been relegated to blocking duty in recent years, not so much for Gronk and the guys who burned a first-round pick on the blueprint-turned-double coverage-magnet.

Marshawn Lynch leads the NFL in rushing, and he’s the centerpiece of the Seattle Seahawks offense. (Only Arian Foster has more carries.) That makes him the most valuable cog in standard scoring leagues, and it means you can trade a shiny bargaining chip like Foster for Lynch straight up—but that more importantly you can work a lopsided package deal, obtain an additional stud, and lose no production.

Robert Griffin III and Alfred Morris are running rampant in D.C. Each has four rushing scores, and that’s a tie for the league high. Ray Rice has been top a three fantasy footballer since 2009, but with Joe Flacco’s night-and-day passing maturation, he finds himself outside the top 10 in touches and yardage. Again not a concern if your league gives you a point per reception, but monitor the diminishing returns closely. When brokering trades, look to the bros seeing stealthy, top-10 level touches: BenJarvus Green-Ellis, Doug Martin, Stevan Ridley, and Alfred Morris

In relief of high-priced youngster Jake Locker, Matt Hasselbeck completed 17 passes for 193 yard and two touchdowns. A former Super Bowl quarterback, Hasselbeck is the most valuable type of backup: He knows the system in and out, doesn’t care about statistics because he isn’t auditioning for a future job, and will have no qualms about opening up the playbook and trying stuff because he’s approaching 40. In other words, #YOLO.

Thomas catches well out of the backfield and routinely turns four grabs into 50 yards, can get to 100 yards in 10 carries, and is massively overdue for a score this season. Williams is the guy going forward for Arizona, and he’s talented enough to breakout Thursday night. Count on a touchdown.

Hixon benefits from injuries to Ramses Barden and Hakeem Nicks, and is coming off a six-catch, 100-yard-plus performance. Start him over struggling brands like Steve Smith. With Santonio Holmes out for the season, Chaz Schilens moves into a default promotion and is instantly the most experienced receiver on the struggling Jets.

I’m throwing a two-tight end set this week: Myers is the leading receiver on the Oakland Raiders, and I just have a good feeling about Dreesen as he heads into a Manning-Brady duel that will be full of unsung heroes.

Photo of A.J. Green via Navin75/Flickr