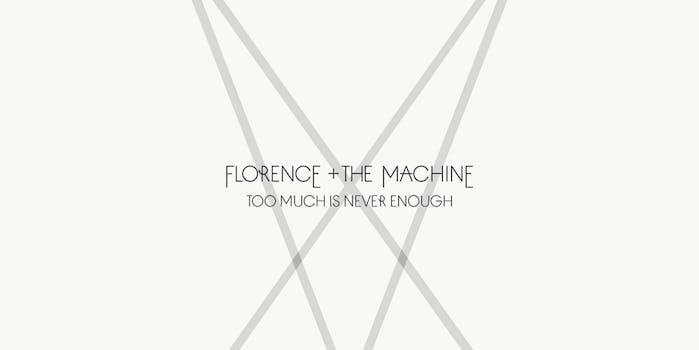 New Music: 6 new songs by the White Stripes, Florence and the Machine, Oyster Kids and more

This week’s most urgent and new streaming cuts.

Florence and the Machine

Florence and the Machine released a Final Fantasy 15 EP on Friday with three songs that are just as magical as anyone could have hoped for.

One of the new tracks, a dazzling cover of Ben E. King’s “Stand By Me,” will be featured as the video game’s theme song. “Too Much Is Never Enough” and “I Will Be” both stray from Florence Welch’s typical melodramatic tone, featuring emotional belts and powerful string notes inciting warmth with every second.

Florence and The Machine has produced three albums prior to the release, How Big, How Blue, How Beautiful being the most recent in 2015. Final Fantasy 15 marks the band’s first foray into video game-inspired music, and it’s clear the massive franchise had an impact on Welch.

“In some ways the landscape of Final Fantasy and my own internal landscape seemed to fit quite well, it’s mythical and beautiful and epic.” Welch said in a statement on Twitter.  “It was really fascinating, the music was incredibly beautiful and emotional and I took it as a sort of sign, to see what I can do in this medium.”

The White Stripes surprised us on Friday with the previously unreleased song “City Lights,” as a look into what to expect for his upcoming and promised album, Jack White Acoustic Recordings 1998-2016.

White revisits the unused track that was meant for 2005’s Get Behind Me Satan and re-furbishes it in an acoustic manner for the forthcoming album Jack White Acoustic Recordings 1998-2016. The mega-LP features 26 b-sides, remixes and alternate versions of previously released material in chronological order.

Up and coming indie-pop duo Oyster Kids graces us with its third single, “Gum (Everybody’s My Friend),” a track dedicated to all the misfits who feel like they are on the outside looking in.

The Los Angeles-based band is made up of brothers Eapen and Andrew Slagle whose infectious sound is reminiscent of fellow LA rockers Foster the People crossed with the French cool of Phoenix. This new release mixes squeaky clean vocals with a steady musical backdrop and catchy bass rhythms, producing a great low-key jam.

Copenhagen and Brooklyn-based duo Blue Foundation released their new song, “Watch You Sleeping,” ahead of their forthcoming LP Blood Moon that’s set to be released Sept. 2.

The two explore the genre of dream-pop, producing tracks that are lush and ethereal. “Watch You Sleeping” features synths muffled by celestial sounds, soft bass, and lead singer Tobias Wilner’s monotonous tone weaving through what sounds like solar winds. “Watch You Sleep” is just as immersive and sonically world-building.

This outfit sure knows how to set a scene. It’s no wonder Blue Foundation’s material has been featured on TV shows like CSI: Miami and The Vampire Diaries as well as in the film Miami Vice. The band’s “Eyes on Fire” was also featured in the Twilight soundtrack, an album that went double platinum in 2009 for surprisingly good reason.

“Black Beatles,” featuring Gucci Mane, stands out on the lighter side in contrast to most of the new album. The song’s harmonic tones mixed with eclectic rhymes incorporates a simple electronic beat that’s sure to stick with you after just one listen.

Rae Sremmurd joins a unique movement in the crowded hip-hop scene, unafraid to mix melodic choruses with brutal versus that prove both brothers won’t hold back when its time to spit game. That fire has earned Rae Sremmurd its first headlining tour with Lil Yachty, set to kick off this fall Oct. 1 in New Orleans.

Tinashe channels the beach kitsch of Baywatch with her own “Bae-Watch” in the music video for her new song “Superlove,” released on Friday.

The R&B singer sports a red bejeweled bikini in the new video, as she and her posse rescue swimmers and get down on a black platform in the sand. As for the single, “Superlove” is a total summer anthem with a dazzling-pop beat. While summer is coming to a close, Tinashe isn’t ready to give it up just yet and we are perfectly OK with that.