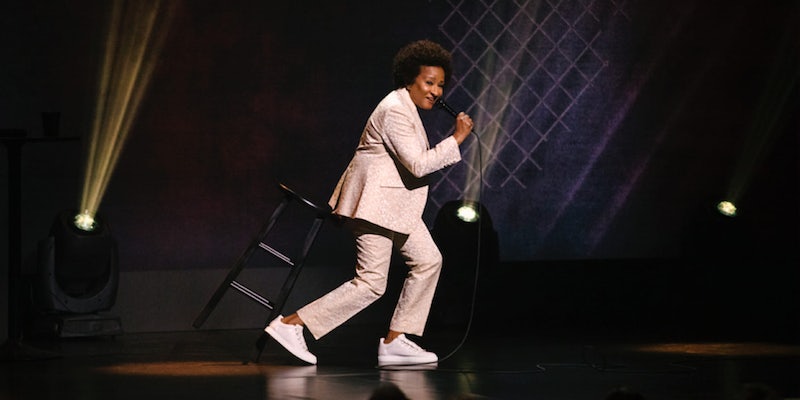 The comedian paints a vivid picture of rage and middle age in her first Netflix special.

Wanda Sykes isn’t coy about what Not Normal means. Minutes into her first Netflix special, she gets some reps in, applying the phrase to the chaos and cognitive dissonance of Trump’s presidency, and what’s it’s done to many Americans: “He has cracked Black.”

She isn’t coy about the rest of her life, either. In Not Normal, Sykes discusses being married to a French woman, having two white children, and dealing with the indignities of menopause and aging. Recent shows and movies have tackled the invisibility of women in middle age—Wine Country, Dead to Me, Better Things—but Sykes puts a finer point on it, relating it back to the bigger picture: Trump’s presidency has put more women in Congress. Women don’t lose their agency at a certain age.

While Netflix has released several original hourlong comedy specials from Black men, Sykes’ is the first from a Black woman. Mo’Nique calling Netflix out last year for lowballing her on a special drew support from Sykes, who revealed she’d also been lowballed and offered even less than Mo’Nique. She took her 2016 special to Epix, but at a Variety event in April, Sykes said she finally agreed to do a special after Netflix offered to pay her what she was worth and “moved that comma.” Now she’s executive producing Tiffany Haddish’s upcoming standup series They Ready, featuring six comedians handpicked by Haddish.

Netflix needs that perspective. Sykes is uniquely qualified to discuss the dread of white supremacy going mainstream while she’s living in a majority-white house. A bit about her son playfully kicking a balloon in her face and her angry response is a slow burn, a line into her world as she tries to adjust to life with kids. Ditto on a bit about introducing Vicks to her family, and the horror-movie scene that follows. Sykes turns those little moments into big ones.

She also surveys the pop culture landscape and tries to unravel the cognitive dissonance around shows like The Bachelor, which she says is at odds with Me Too and Time’s Up and “makes women look stupid.” She paints a vivid picture of what women go through in their 40s and 50s—normal things like developing a gut, growing chin hairs, and having hot flashes. “If a man had two hot flashes, they would blow the sun up,” she posits.

Sykes applies Not Normal to other events that have become distressingly normal, like the 2018 shooting of security guard Jemel Roberson in Chicago, and the weight of her saying, “Why can’t we be the good guy?” Sykes manages to balance the personal and the political in a way that doesn’t feel heavy-handed, even if comedians commenting on Trump has now become de rigueur. She’s always had a command of the stage, and her delivery makes viewers turn around and pay attention. Once she gets the Trump stuff off her chest, Not Normal opens up a little more—and we get to see Sykes open up, too.