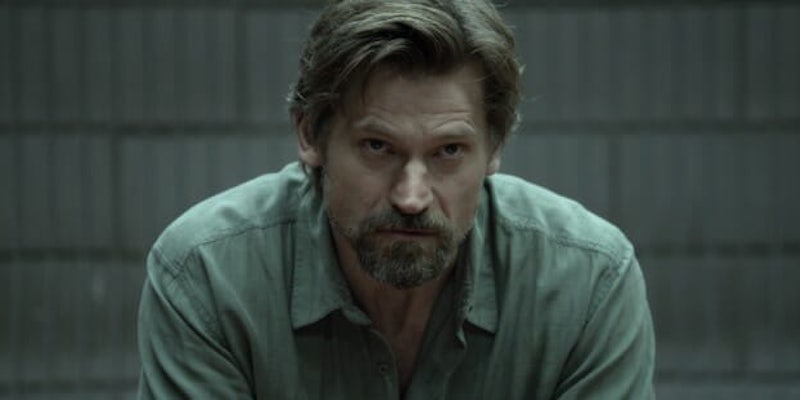 Evan Katz scored a festival hit with his 2013 directorial debut Cheap Thrills. It’s about a couple of extremely desperate men doing increasingly unpleasant things for money that they desperately need. While the premise is gimmicky, the motivations that propelled the characters were all too real. Katz’s second feature, Small Crimes, follows a similar blueprint to satisfying, if familiar, results.

The Netflix-produced film, now available via the streaming giant, is based on Dave Zeltserman’s acclaimed novel of the same name, and is adapted for the screen by Katz and co-writer Macon Blair (Blue Ruin, Green Room), who also plays a supporting role. Katz and Blair are low-budget darlings and if you’re a fan of any of their work, you’ll enjoy Small Crimes. Like a band playing to its audience, they dish out the hits: shocking bursts of violence, dark humor, and strong performances.

Joe (Game of Thrones‘s Nikolaj Coster-Waldau) is an ex-cop fresh out of prison after doing six years for attempted murder. Before going away, Joe had a rapsheet’s worth of vices and corruption. It cost him his family (as always in these kinds of stories), and everything else he cared about (of course). Hilariously, Joe is roped back into his old games upon his release. That sets the stage for Small Crimes, a propulsive thriller of rapidly escalating amusement and preposterous stakes.

Running through the film, and Joe ‘s arc specifically, is the idea of not being able to escape your demons. Joe starts the movie with six years of sobriety, but kicks back shots with little hestitaion once he’s out. He does pause briefly before entering the bar, and again before taking the first drink, at least. Coster-Waldau looks like he has the weight of the world on his shoulders and you can almost see it slip off him as he gives in. It’s a precursor for the relapses he’ll experience throughout the movie—this sad inevitability becomes Joe’s defining trait.

Joe is desperate to reconnect with his daughters, and reluctantly agrees to do some dirt for a former supervisor (a slimy Gary Cole) in exchange for legal help. Before Joe knows it he’s hatching plans and sinking deeper into a pit of quicksand. No one is able to escape the destructive orbit around Joe. Not his parents (Jacki Weaver, Robert Forster); nor his old partner (Michael Kinney); nor his love intereset (Molly Parker); and especially the dirtbags he tussles with (Pat Healy, Blair, among others). This is the kind of movie where nothing works out the way it was meant to. The escalating comedy of error culminates in a predestined violent showdown that manages to bring many of the storylines together.

The movie moves with brutal efficiency. At a lean 95 minutes, Small Crimes wastes no time despite wasting many people. It features a stellar cast doing strong work. When the plot mechanics become tedious, the cast always picks up the slack. Coster-Waldau gives a lived-in performance, wearing the character’s shortcomings like one of Joe’s bland button-ups. His accent really stood out to me but not in a bad way. There’s a sturdiness to his voice that keeps him from sounding as desperate as other actors may have played it. It creates the facade that Joe is in control when in fact he’s just a pawn in someone else’s game.

Healy and Blair are genre stalwarts at this point, and are effortlessly entertaining. But the heart of the movie is Weaver and Forster. Their characters recognize the damage their parental shortcomings did to Joe, and work to minimize the effect of Joe’s damage going forward. The film’s best scene is a father-son chat with Forster’s character laying out precisely how he failed his son.

Small Crimes is sure to please fans of the genre, but isn’t as strong as some of Katz and Blair’s recent output. I recommend checking out Cheap Thrills to see Katz at his best. Netflix recently released Blair’s directorial debut, I Don’t Feel at Home in this World Anymore, another darkly comic crime film that remains his strongest work. Let those films be the main course, then chase it with Small Crimes.