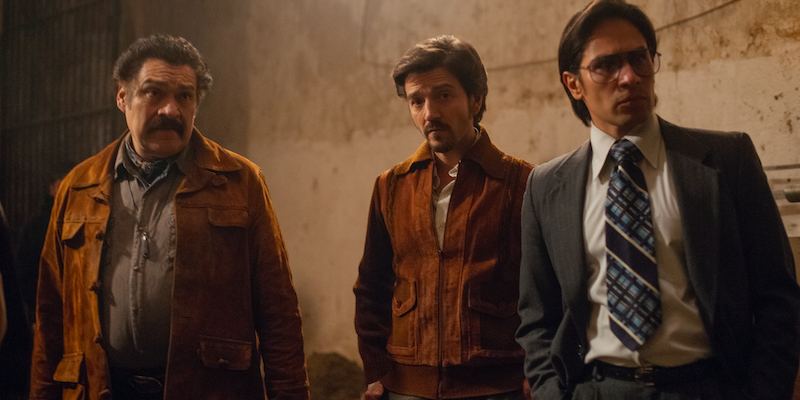 ‘Narcos: Mexico’ is an addictive soft reboot of the drug drama

Netflix’s drug epic Narcos has been challenged to reinvent itself repeatedly. When it originally launched in 2015, the show was very much about one man: Wagner Moura, in a barn-burning performance as Colombian drug kingpin Pablo Escobar. The story of his rise and fall stretched over the first two seasons, but anyone who knew a bit of history knew his story had one inevitable conclusion.

With season 2 culminating in Escobar’s rooftop execution, Narcos’ third season turned to explore the men who rose to fill the vacuum created by his absence, a different type of drug cartel that was more corporate and less cult of personality. The end of that season implied where things were headed, should the show continue, and Narcos: Mexico takes viewers into a new corner of the decades-long drug war while serving as a sort of soft reboot for the series.

As the title suggests, Narcos: Mexico shifts the focus north, from Colombia to Mexico, and explores how the latter became an important nexus for the drug trade—specifically, the rise of the Guadalajara Cartel during the 1980s. The series pivots between two central characters on opposite sides of the enterprise. Diego Luna plays Félix Gallardo, an enterprising trafficker who rises to the head of the Guadalajara Cartel thanks to his shrewd intelligence and willingness to take huge risks in attempting to form an alliance between a circus of violent, competing criminal fiefdoms. Opposing him is Kiki Camarena (Michael Peña), an ambitious DEA agent with no patience for “established protocols” that only serve to secure the status quo.

As with earlier seasons of Narcos, a cursory knowledge of the real-life events and people portrayed here suggests Gallardo and Camarena are on a collision course that will end badly for at least one of them. But there is plenty of action, intensity, and drama to be found along that path, buoyed by solid performances from the two leads and excellent supporting cast members. While no one delivers a performance as remarkable or charismatic as Moura’s Escobar in the first two seasons, Narcos continues evolving to explore similar subject matter in new ways.

For example, Narcos: Mexico has an easier sense of humor than previous seasons, though the laughs are often appropriately bleak and gallows-centric. Luna’s Gallardo is also a different kingpin than the ones we’ve seen before on the show. He initially seems ill-suited for the life he’s chosen, but he proves just as menacing as Escobar in the long run—all the more so because he’s easily underestimated.

Narcos: Mexico carries one tragic recent footnote: In September 2017, Carlos Muñoz Portal, one of the show’s location scouts, was found dead near the town of Temascalapa in Central Mexico. Given where he was and what he was doing, people immediately speculated that narco gangs killed Portal. His murder remains unsolved today, but it offers a sobering reminder of the Sisyphean futility of the decades-long drug war, which never seems to end, only evolve. Narcos continues to demonstrate this daunting reality, suggesting that it won’t run out of potential subject matter anytime soon.