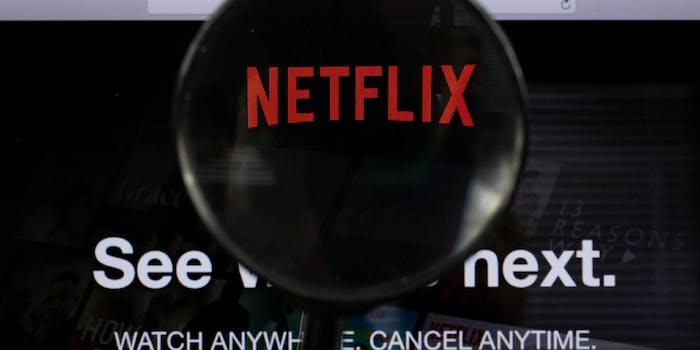 Netflix’s instant rewind button is not popular with users

Netflix‘s newest feature is already facing harsh criticism, and it hasn’t even rolled out yet. The streaming service is testing out an instant rewind feature, which allows users to re-watch a scene they’ve just finished. The button is being tested on Netflix films like Mowgli and Dumplin’ but so far, users find it distracting, irritating, and entirely unnecessary.

The button pops up at the bottom right of the screen, in the same area as the “skip intro” button. Netflix confirmed to the Los Angeles Times that the button is currently available after specific scenes of particular Netflix originals.

“We’re trying out a feature which gives Netflix members the ability to rewatch favorite scenes and memorable moments with the click of a button,” a Netflix spokesperson told the Times. “Right now we’re just looking to learn from it and may or may not roll it out more broadly in the future.”

If Netflix is paying attention to user reactions, the feature won’t last long. Netflix subscribers across Twitter and Reddit have been criticizing the rewind button since it debuted. “Watching Dumbling [sic] (which is fairly meh) but throughout the movie a popup link of ‘watch this scene again’ will appear,” Redditor alohasprinting posted. “Why does Netflix insist on devaluing film even more than it does,” the Redditor complained?

“Same, really messed up my immersion,” catsinapeoplesuit responded. “So far it’s happened right after two intense scenes. Really took me out of the moment.”

“I hope this isn’t a permanent thing because it’s distracting and obnoxious,” another user said. “If I want to see something again, I’ll rewind it myself…I don’t need a prompt.”

The "instant replay" option Netflix added almost feels like they're insulting my intelligence. I know how to rewind Netflix, if I want to "watch that scene" again I'm fully capable of doing so on my own

Hey @netflix instant replay sucks, I dont want your crap jarring me out of my movie, might as well add a commercial. Leave that shit for sports channels. Or at least give us an opt out if you go live with this junk.

Despite the mostly negative reactions, people on the internet have been calling for a similar feature for years.

Netflix needs a 30 second instant rewind button because your phone buzzed and you HAD to look at it.

“Should be a 30 second instant rewind button on Netflix and that so you can get back to the bit before you got distracted,” @TOBINATOR_ wrote in late 2017.

Users are not into the current feature Netflix is trying out, but if the streaming giant listens to feedback perhaps it will come up with a happy medium. That is the point of a testing period, right?