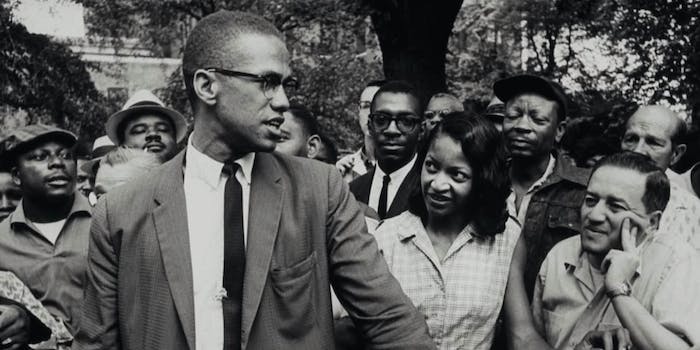 The docuseries could be responsible for clearing a man's name five decades after the fact.

Netflix’s Who Killed Malcolm X? is prompting Manhattan’s district attorney’s office to reopen the investigation into the assassination of Malcolm X.

The office announced its intention to reinvestigate the case Monday. The announcement was made thanks to new evidence revealed in the Netflix docuseries oriented around Malcolm X’s death. The new evidence, presented by historian Abdur-Rahman Muhammad, could help clear a man’s name more than five decades after the fact.

On Feb. 21, 1965, civil rights activist Malcolm X was fatally shot at the Audubon Ballroom in New York. One year later, three men were sentenced to life in prison for their part in his death. Muhammad Aziz, who at the time was known as Norman 3X Butler; Mujahid Abdul Halim, also known as Thomas Hagan; and Khalil Islam, also known as Thomas 15X Johnson, were all convicted in the 1966 trial, and spent, at minimum, the next two decades in prison.

In the Netflix docuseries, Abdur-Rahman Muhammad calls into question whether or not all three men were involved in the assassination. His denial that Muhammad Aziz, now 81 years old, was actually involved—and his evidence backing it up—prompted the district attorney’s office to reopen the case.

Halim, for his part, has continued to assert his guilt for more than 50 years. During the trial, he confessed to his part in the assassination. He also maintained that Islam and Aziz “had nothing to do with it,” according to Complex. Despite his initial refusal to identify the four other people he claimed were involved, Halim’s tune eventually changed. In the late 1970s, two affidavits submitted by Halim claimed that both men were innocent. The documents also outlined the identities of the other men Halim claims were involved. Despite his efforts, the case was never reopened.

Over the last five decades, all three men have been released from prison. Islam was released in 1987 and passed away just over 20 years later in 2009. Halim, who is still alive, was paroled in 2010. Aziz was also paroled, but more than 25 years earlier, in 1985. Since then, he has become the head of the Nation of Islam’s Harlem mosque. For decades, he has maintained his innocence and fought to clear his name.

Thanks to Who Killed Malcolm X?, directed by Phil Bertelsen and Rachel Dretzin, a legal review will investigate whether or not Aziz really is innocent. The Innocence Project, a non-profit organization that works to free the wrongfully convicted, has also joined the effort.

Between them, the case for Aziz is already strong. Halim’s testimony, combined with the Innocence Project’s claim that no evidence links either Aziz or Islam to the murder, could be enough to clear Aziz’s name. To top it off, Aziz claims that he was far from the assassination when it occurred. According to Aziz, he was nursing an injury at his home when he learned of Malcolm X’s death. “The day of the murder, which was a Sunday morning, I was laying over the couch with my foot up and I heard it over the radio,” he said.

The six-episode series Who Killed Malcolm X? can now be viewed on Netflix.