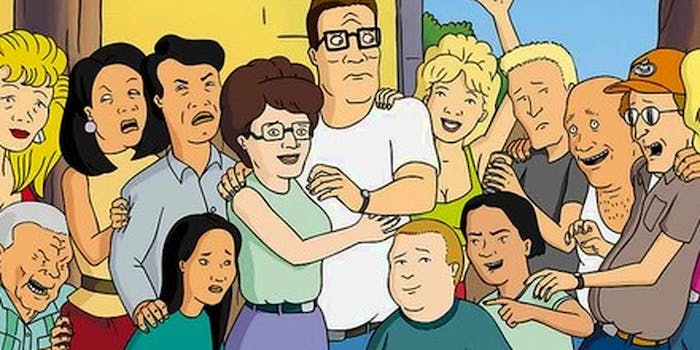 Maybe you use Netflix to watch all sorts of movies, TV shows, documentaries and comedy specials—or maybe you use it for one very specific purpose, as seems to be the case with the mob of King of the Hill fans outraged that their beloved animated sitcom is no longer streaming.

The 13-season series is a deadpan, offbeat, and ultimately heartwarming look at a somewhat square family living in the fictional town of Arlen, Texas. It’s long been a source of great comfort to a cultishly devoted fanbase well past its 2008 cancellation, thanks in part to its prominent presence in the Netflix lineup. But as of yesterday, viewers will have to get the 19 DVD discs mailed to them one by one if they want to watch it, and a true binge is out of the question.

“We may have rotated it out of our entertainment catalog,” is how Netflix explains the situation when you click on their “Why is this title unavailable to stream?” link. To King of the Hill loyalists, however, the very idea of revoking access to Hank, Peggy, and Bobby Hill is tantamount to a breach of contract; a slew of angry five-star reviews was not far behind.

“I am begging you!!! Please keep King of the Hill streaming online!!! This show helps me remain calm every day, all throughout the day. This show is like my Valium,” wrote a math teacher for whom large daily doses of the show were a given.

I really have no reason to keep Netflix without this show at my disposal. This one show has been the salvation from crappy D-B level movies Netflix is cluttered with.

i watch this show all the time it’s one of the few I can watch with my husband bring it back. PLEASE!

The scent of desperation is all over the page:

This was my favorite show of all time, please don’t take this down or I’d have to cancel my membership.

That was a popular threat: “I was hooked on my Netflix because of King of the Hill! Without it on streaming, I might be unsubscribing from Netflix soon.” Again and again, Netflix’s other offerings were impugned: “king of the hill is the only reason netflix watch instantly is worth a flip.”

And while anybody watching King of the Hill over the last month may have noticed the tiny indicator saying it would only be streaming “Until 10/1/13,” many customers felt completely blindsided. “It was the only GOOD long series that was funny. You put out some real garbage and call it new,” wrote one livid user. “The worst part is my payment went through before I knew your sneaky behavior had pulled the show. I want a refund and I’m switching companies.”

Overall, fans took the move as a sign that Netflix was woefully out of touch with the people who made them a viable platform, and remarked, in hundreds of reviews stretching back many pages, that the site is slipping, perhaps not even worth the money. “You guys need to get with the program and let us of have our king of the hill via streaming… YOUR DVD business is DEAD,” advised one party.

Even if you decided to buy the whole series for yourself, Amazon doesn’t carry any DVD sets past the seventh season. We’d advise those Netflix users in Mike Judge withdrawal to screen Beavis and Butt-head Do America if they want to keep from jonesing. Of course, there are also some not-so-corporate streaming services that’ll let you watch King of the Hill episodes—and for free, no less. This website is a lifesaver, I tell you what.