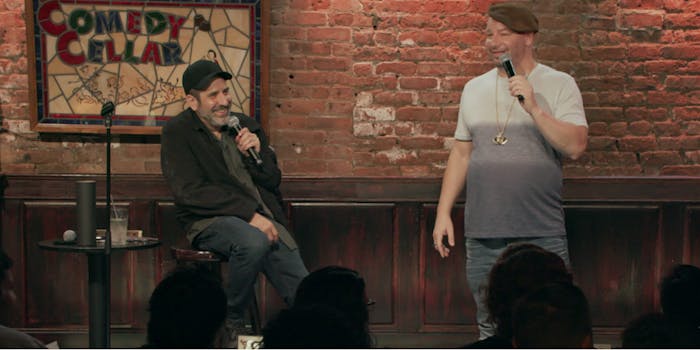 ‘Bumping Mics’ is a short watch that’s long on insults

Jeff Ross and Dave Attell fine-tune the art of the roast in their new special.

The celebrity roast peaked in the early aughts, but the art form is still alive and evolving, and Netflix’s Bumping Mics with Jeff Ross & Dave Attell is the latest entry in the genre of comedians roasting comedians (and themselves).

“Roastmaster General” Jeff Ross earned his title by helming roasts of celebrities, comedians, and inmates. Dave Attell has always been able to rattle off insults and stick the landings, a talent that he put to good use on his Comedy Central show Insomniac and showcased in specials like Road Work. His road-tested comedic timing pairs nicely with Ross’ more laid-back, from-the-gut barbs. Together, they yes-and each other over the coals.

Directed by Andrew Jarecki (The Jinx), Bumping Mics grew out of a Just For Laughs show in Montreal and has now become a vessel for Ross and Attell’s burns—they bump mics when they’ve landed an especially good one. The three episodes—“Friday,” “Saturday,” and “Sunday”—were filmed over a summer weekend at the Comedy Cellar in New York City, where Louis C.K. has been showing up recently. (There’s no mention of C.K. in the special, only Harvey Weinstein.) Early on, Ross tells Attell he looks like “a guy who just threatened Stormy Daniels in a parking lot.” There are the requisite jokes about Attell looking homeless, and Ross being fat. The “You look like…” joke setup can get tiresome, but the hosts don’t get greedy.

In one bit about how we’re in the midst of an “empowerment revolution” for women, Ross concedes “surrender” as a man and that women should take over the world. Before it gets too earnest, he follows up with, “It’s time to find out what you bitches are going to do with it.” In the first episode, Amy Schumer, Rachel Feinstein, and Nikki Glaser hit the stage together, and Michelle Wolf stops by for a bit, but that’s the extent of women comedians on the special, which is disappointing. (Schumer makes note, however: “It’s so good to finally see two middle-aged white guys getting an opportunity.”)

Elsewhere, Bruce Willis makes a cameo and Gilbert Gottfried gets in a couple of have-you-evers about oral sex and your grandmother. Paul Rudd gets roasted for dressing like a divorced dad; veteran Israel Del Toro endures a couple jokes about being burned in an IED explosion and hits back with some of his own. It’s a free-form show structure, but the momentum doesn’t lag.

The few off-stage bits feel shoehorned in, such as Attell shopping for a phone that’s not from the early aughts, but perhaps they were going for that Insomniac feel. It does show Ross and Attell at more vulnerable moments, when they’re musing on the craft of comedy instead of busting balls. Early in the special, Attell stresses the importance of being passionate about joke-writing and asserts that a joke only becomes real when the crowd makes it so.

Bumping Mics isn’t a traditional showcase like Netflix has tested out with The Degenerates or The Comedy Lineup; you probably won’t find your new favorite comedian here. But it is an easy time investment—under two hours—and the barrage of finely curated insults does leave you in an oddly meditative state.