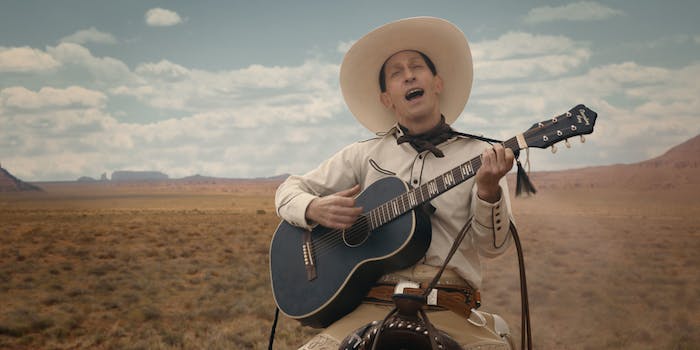 You can kind of tell why this anthology of Wild West stories wound up on Netflix.

A Wild West movie all about white men, where Native Americans only appear onscreen to scalp people and get shot in the head? Groundbreaking.

The Ballad of Buster Scruggs is a self-indulgent operation, which isn’t always a bad thing. Plenty of great movies have arisen from self-indulgence, although that’s usually because you can taste the creator’s passion. For instance, last year’s Best Picture winner The Shape of Water emerged straight from Guillermo del Toro’s id, fueled by a lifelong passion for monster movies. The Ballad of Buster Scruggs comes from a similar love of classic Westerns, but the Coen brothers’ passion doesn’t fully translate to a non-Western-obsessed audience. If you’ve ever wondered what kind of weirdo would pay through the nose to hang out in Westworld, well, now you have your answer.

This anthology of six short stories was originally planned as a TV series and later compressed down to a feature-length film. Written over the course of 25 years, they’re quirky little pastiches of various Western settings, each one pleasingly unpredictable and varying slightly in tone. The story of the titular Buster Scruggs (Tim Blake Nelson) is an enthusiastically silly musical, while others present Tom Waits as a crotchety gold prospector (delightful, obviously), and Zoe Kazan as a migrant on the Oregon Trail.

After more than a century of Wild West movies, new additions either need to be notably subversive or truly great to leave their mark. This film is neither, partly for my aforementioned reason. The Hollywood tradition of all-white Westerns is wildly ahistorical (an estimated 25% of 19th century cowboys were Black), and given that The Ballad tells six different stories, you’d think the Coens might have managed more than two female characters in their extensive ensemble cast.

Of course, historical accuracy isn’t especially relevant here, since most of The Ballad’s chapters are absurd comedy-dramas. But we’re then left with only one explanation for the Coens’ casting choices: They wanted to rewrite history to focus on white men, either not noticing or not caring how this might look to everyone else. If The Ballad was a masterpiece I’d have less of a problem with that (I’d never complain about the same issue in There Will Be Blood, for instance, because it had something specific to say), but the best I can muster here is “reasonably entertaining.” And that doesn’t quite cut it, especially coming from the Coens. It’s a technically accomplished work by two of the most beloved directors working today, but it just doesn’t offer enough substance.

I’m heartily in favor of this unusual format (2016’s Certain Women was an excellent and similarly star-studded triptych of short stories), but ultimately The Ballad of Buster Scruggs is a letdown. It’s funny, but it’s not O Brother, Where Art Thou? funny. Some of the stories pack a punch, while others just feel like an excuse to put someone famous in a cowboy hat.

In other words, you can kind of see why The Ballad of Buster Scruggs wound up on Netflix. People will undoubtedly click on a new Coen Brothers movie if it shows up on their Netflix account, but this was a risky proposition for theatrical release—and more to the point, it might not have been worth the ticket price.

The Ballad of Buster Scruggs is currently screening at the London Film Festival, and will arrive on Netflix on Nov. 16.