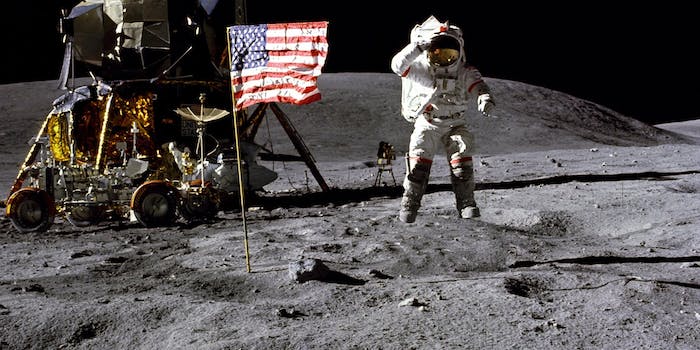 Slip the surly bonds of Earth with NASA feeds

You may not be able to soar into outer space, but if you follow NASA's social media feeds, you might get a whole lot closer.

Decades ago, when the United States and the Soviet Union raced for the stars, and eventually the moon, NASA didn’t have to work very hard to get attention. Today is very different. Besides being just one of a million different distractions in this Internet age, the government agency lost its most visible program; the space shuttle.

But now NASA is turning to social media and using both Twitter and Google+ to get the message out that America’s mission in space is far from over.

Perhaps the most interesting way to spread the word is NASA’s Tweetup events, where dozens of NASA followers on Twitter are invited for special tours and events, including the launching of the final shuttle mission in July. NASA fans register online and are selected by lottery. In an Associated Press story published this week, Stephanie Schierholz, NASA’s social media manager, said the space agency hopes the attendees report their experience back to their followers, no matter how few they may have.

Next week, 150 NASA Twitter followers will make their way Cape Canaveral, Fla. and the Kennedy Space Center where they will witness the launch of the Mars Rover. According to a press release from NASA, more than 1,050 people applied for the chance to be selected.

Jess Lucero, of Great Falls, Mont., said when he participated in the Tweetup in July it was the closest thing to an all access pass as one could get. His group was allowed into the press site, which had one of the best views for the final launch of the space shuttle and is as close as NASA would allow anyone to get.

“The atmosphere was electric,” Lucero told the Daily Dot. “Really like nothing I have ever experienced.  Media was everywhere and I even had our local news stations calling me for interviews.”

However those not lucky enough to be part of the 150 selected to go to Cape Canaveral can still get plenty of insider information from Twitter.

NASA has set up a public list featuring the tweets of astronauts currently working on the International Space Station. While in space, the astronauts tweet about their daily activities and even photos from space—including this stunning photograph of the shuttle’s final trip home. NASA also created @NASA_Astronautes to follow all of the agencies active fliers, whether they are weightless or earthbound. Those lucky few who are in space often utilize #FromSpace.

Twitter isn’t the only domain being used by NASA. The agency quickly established a Google+ account last week when it was announced that brands could create their own profile. NASA kicked things off on Nov. 7, writing “We’re just getting started on Google+! What would you like to see on NASA’s page?” Since then the agency has been increasingly active, with four or five posts everyday.

In a blog post on Google+, Deputy Chief Information Officer Deborah Diaz said NASA has always been at the forefront of technology—from having one of the first websites in the 1990s to being the first federal government agency on Google+.

“As an agency trusted with charting the universe and expanding human knowledge, NASA has long been at the forefront of using the Internet to communicate with and involve citizens in our mission of space exploration, scientific discovery, and aeronautics research,” she wrote.