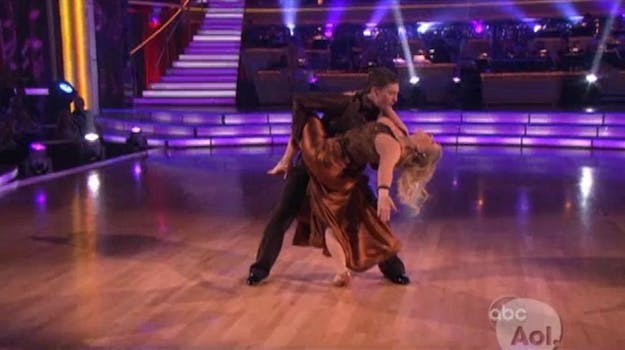 Graced with a nip slip

Controversial commentator Nancy Grace gets visually controversial when her nippple slips from her dress during live TV. People noticed.

A nip slip (nipple slip) is like a solar eclipse: it happens ever so often and when it does, most people look away while some lean in to sneak a peek.

On Monday night’s “Dancing with the Stars,” TV host Nancy Grace accidentally exposed her nipple, capturing the media’s attention and causing some Twitter users to mockingly claim it had left them blind

During a dance routine on the hit reality show, Grace, a controversial legal commentator who hosts her own show on CNN Headline News (HLN), accidentally exposed her breast “after an energetic performance with partner Tristan MacManus,” according to ABC News.

Grace has been a lightning rod for controversy over the last nine years, making sensational claims during the Duke University lacrosse case and Caylee Anthony’s disappearance.

The wardrobe malfunction took Twitter by storm and quickly became a top trending topic. Since 11 p.m. Monday ET, the TV host has been mentioned more than 3,000 times, according to statistics from Topsy, a social media search engine.
Most people on the micro blogging reacted to Grace’s exposed areola with a mixture of mock outrage and perhaps very real disgust.

“Four words I prayed I would never see together: ‘Nancy Grace nip slip,’” tweeted Eric Stangel, executive producer for the “Late Show with David Letterman. “I just threw up my last 4 meals….”
“I’m officially blind from the Nancy Grace nip slip on #DWTS,” tweeted dbone15. “What a friggin pig.”

Nipple slips have been a part of American culture for more than a decade. By far, the most famous bust revealing incident happened on Feb. 1, 2004, during the Super Bowl halftime show. During the performance, Justin Timberlake says he accidentally exposed Janet Jackson’s breast, resulting in a $550,000 fine for CBS, although many speculated that the whole event was staged.

With that, the term “wardrobe malfunction” was added to the American lexicon.