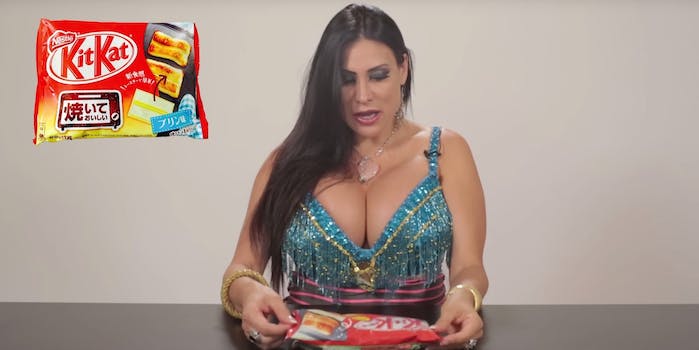 No prizes for guessing the double entendres.

No, probably not. But in a misdirected attempt at viral relevance, Myx TV—an Asian-American cable network—has made it possible to watch all these things with the launch of three new webseries.

First up is The Alternative, where an “Eastern medicine specialist and holistic healer” instructs you on the all-natural way to treat acne—pasting your face with a stodge of ground-up oranges and turmeric. Not her face, mind you, as she’s only brave enough to dab a minuscule amount on the back of her hand, likely fearful of an outbreak of flowing pustules.

And that orange “tint” that your skin is left with after letting the turmeric—used as a fabric dye for thousands of years—sear into your skin overnight? Apparently scouring your face with the well-known, organic elixir of Mother Nature that is rubbing alcohol will purge you of the stain and have your visage looking and feeling “shiny.”

And so to Snaxxx, where adult entertainers eat odd varieties of Kit Kats and then repeat fifth-grade sexual innuendos for three and a half minutes. It’s tedious stuff, all the more so when you remember that a similar thing is done so much better elsewhere. What does it say about your onscreen presence if within seconds the viewer is so tired of your dull, predictable patter that the only reason they haven’t turned off is because they’re wondering what could have been even more boring to constantly necessitate being edited out? I’m not sure what this means for their day jobs. Perhaps there is some sort of narcoleptic niche that has somehow passed me by.

Finally there is Buddha Smash, which at least must know that it is stupid: a fat Asian man throwing an Xbox against a wall. As the name suggests, he’s supposed to be Buddha, and you would like to think that his anger is a play on the pacifistic nature of his followers. But I doubt it.

Sacrilegious? Definitely. Racist? The series has a garbled backstory featuring a boat “made of the finest Bok Choy,” so probably. You’ve got to wonder how many people will want to watch this. The answer, after 4 days? 37.