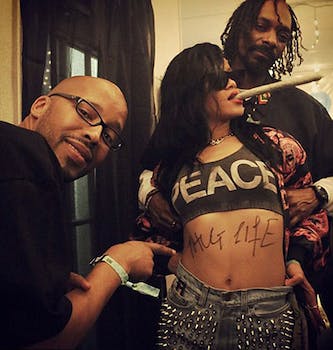 During the early 1980s, MTV was known for its music prowess and understanding of counter culture.

There’s no better indication that the network has gone soft and corporate than a recent tit-for-tat the network got into Thursday evening with singer Rihanna.

In a tweet that this since been deleted, @mtv criticized photos of Rihanna at the Coachella music festival smoking marijuana. One of the photos features Rihanna standing in front of rapper Snoop Dogg with “Thug Life” written across her stomach while toking on a baseball bat-sized fatty.

The Twitter dust-up grabbed Reddit’s attention where two front-page posts praised Rihanna for her candidness and appreciation for marijuana culture.

“To be fair, it’s considered impolite not to smoke pot in the presence of Snoop,” commented hobbit6.

“Oh no! Rihanna was caught smoking pot! Just like every other male celebrity that openly smokes pot in public while rapping about it in songs,” wrote trapped_in_reddit. “Nice one, MTV. Nice one.”