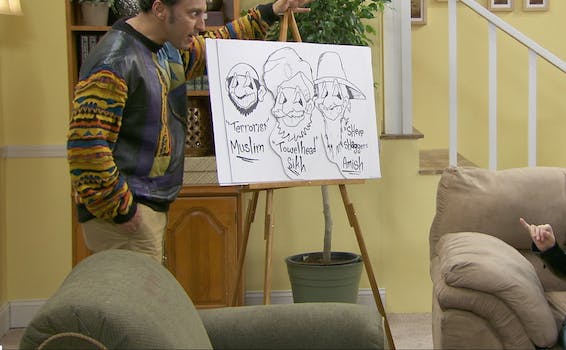 Schick’s new webseries: Not razor-sharp, but not terrible

But will it last?

It is very easy to look down on product placement and “branded” shows and series. “It’s just a big commercial,” you might say. “Where’s the individual voice, the integrity of the storyteller, the authenticity?”

And most of the time, you’d be right to be dismissive, as horrifying examples can attest: Chipotle’s inflammatory satire on industrial food processes, which had more exploding cows than laughs, or Subway’s clumsy attempt to establish sandwiches as an inherent component of good-natured teenage rebellion and hijinks.

But while those are clearly awful, what then of Fritz Lang’s M—where Peter Lorre shares the screen with a giant chewing gum sign—or even E.T‘s Reese’s Pieces? Decent flicks both, but crucially, two occurrences when the men with the corporate checkbooks have found the door to the film’s creative meetings firmly locked.

Which brings us to MsLabelled, Schick’s (they of the Slim Twin, Xtreme 3, Quattro, and Hydro 5 Power Select) foray into the webseries world.

Centered around Ella, a wannabe blogger and personal assistant at a fashion magazine, MsLabelled may be blighted by annoying Perez-esque onscreen doodling and an aping of Devil Wears Prada rhythms—her love interest says it best, she’s “a smart girl that works a garbage job for self-obsessed people who make things that nobody needs”—but it’s pleasant and breezy stuff. Ultimately, there’s a lot of sharp musing around clothes and Internet culture wrapped around a central whodunit that admittedly kept me interested.

But what most intrigues is the almost total lack of Schick; no sponsorship messages, no links or flashing logos. It’s not entirely free of any mention of shaving, mind you. In episode 7, Ella oddly gets praised for her shapely legs: “What do you, like, Quattro those things?!” as if a razor can carve your body into a desired shape. But it’s far from the blatant “we’re paying for this, so we’ll do it our way” levels of the Mac and Me ilk. The restraint is refreshing, and the program is much better for it.

Of course this won’t last. To Schick MsLabelled is no doubt in an early, invasive stage; growing a viewership before eventually being harvested for profit. As guidance for its developmental arc, we need only look to shift2’s other branded outing, Kimberley-Clark’s Sheridan Le Fanu–inspired supernatural series Carmilla. That one took its own sweet time before becoming an advertisement for tampons, when, in a series add-on they finally answered that most ancient of questions: “Do Vampires Get Their Periods” (and yes, apparently they do).