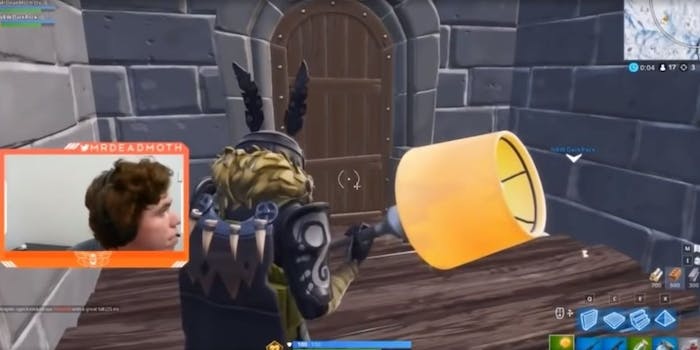 His partner has also been charged.

Last December, Twitch streamer MrDeadMoth got into a physical confrontation with his pregnant partner while broadcasting live. On Monday, he admitted to it, pleading guilty to common assault, according to the Sydney Morning Herald.

MrDeadMoth—whose real name is Luke James Munday—was shown rushing off camera during the incident, and a slapping sound could be heard soon after. His partner, Grace Campbell, then said, “Do you hear that, all you people there? He hit me in the face.”

The 26-year-old Munday will be sentenced in August.

Campbell has also been charged with two counts of common assault because she is alleged to have thrown a tea kettle at Munday during the argument. “The woman allegedly assaulted the man, and he sustained minor injuries,” Australian police said.

The argument reportedly began because Campbell, 21, repeatedly asked Munday when he would join the family for dinner. “Can you not? I said I’ll be out soon,” Munday told her. He also told her to “fuck off.” Police said she became frustrated with his answers, and she threw household items at him.

He then assaulted her with their two young children in the house. Police said, “the accused showed remorse for his actions during the interview stating that he was aware his actions were inappropriate and that he should not have done what he did.”

Munday was immediately banned by Twitch but a few weeks later, he was temporarily allowed back on the platform, leading to plenty of anger from other users. Munday has since been banned again.

According to news.com.au, Munday wrote a letter to the court in February, asking that he and Campbell be allowed to live together again. The couple’s third child was born in March.

“After the incident in December 2018, myself and Grace have identified some key areas which require work within our relationship,” Munday wrote. “… “I need to support my partner and children through these hard times to ensure our boy and girls are safe and have the support they require.”