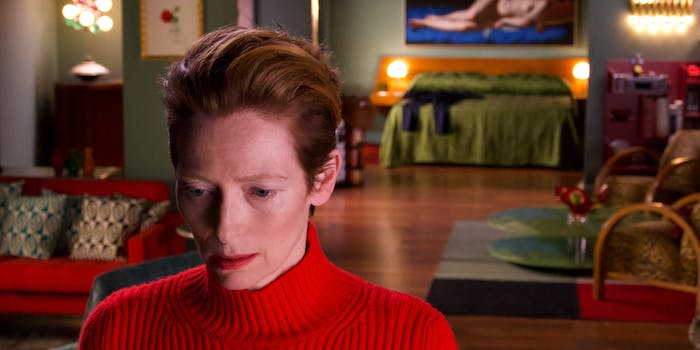 A great pairing of actor and director.

There’s something almost fitting about the fact that The Human Voice, director Pedro Almodóvar’s English language debut, was filmed in the middle of lockdown. It’s not about a pandemic, as some of the pandemic’s projects have been; it was announced before COVID-19 officially became a pandemic. The Human Voice’s origins go back nearly 100 years: It’s loosely based on the 1930 play by Jean Cocteau, which has been performed and adapted for the stage, the screen, and the airwaves several times over in the decades since.

The Human Voice isn’t about the pandemic itself or “these current times,” at least not explicitly. But we still recognize ourselves and hints of our current world within The Human Voice, which captures our collective sense of isolation and the varying paths it can take us so distinctly with a mesmerizing—and often cathartic—one-woman show from Tilda Swinton.

Apart from a couple of scenes that bookend the short film, it’s entirely a Swinton showcase, and we’ll all the better for it. We never lose sight of Swinton, who plays a nameless actress and model, as she goes through the motions of what could be just another day or a vastly important one. She goes to a hardware store to purchase an ax with an adorable dog named Dash by her side and stuffs the ax into her oversized purse. She later returns home to her lavish apartment and pours herself some wine. She looks outside, shattering the immersive illusion to reveal that the apartment interior is located on a film stage; we also catch glimpses of the entire apartment from overhead.

I mention this aspect of the apartment that Swinton spends the vast majority of The Human Voice’s 30-minute runtime in not to highlight a flaw; far from it. Everything about The Human Voice—from Swinton’s emotional performance to the exquisite colors and patterns of the apartment itself designed by frequent Almodóvar collaborator Antxón Gómez (who was the production designer for Almodóvar’s Oscar 2019 contender Pain and Glory)—draws you in. It’s easy to forget that it takes place on a film stage—even as we see the film stage from above and even as Swinton walks outside of it.

And once she gets home, we spend plenty of time acclimating ourselves to the apartment itself. Swinton naturally fits in with coats, three-piece suits, and sweaters in red and blue (a great contrast to the darker suit her ex-lover once wore); she dons several outfits throughout the short film, each one more luxurious than the last.

Even the eclectic DVD and book collection the nameless woman goes through (including the likes of The Phantom Thread, Jackie, Shoplifters, and a couple of books by Truman Capote, among many others) help give us hints of who she once was or what she and the ex-lover might’ve been into once upon a time.

This woman has spent the past three days waiting to hear from the nameless ex-lover, who she spent the past four years dating before he left her for another woman, to arrange for him to come over to pick up his things. She’s got nothing but time and his dog to keep her company, something that sends her mind reeling long before he calls her. It’s a tense conversation rich with history even if we only ever hear one side of it; we never hear the man’s voice on the other end. Visually, it comes off as a lengthy monologue wrought with layers of hurt as Swinton goes through the ups and downs of their relationship.

In previous iterations, the phone conversation at the center of The Human Voice is on a landline. In Almodóvar’s version, the unnamed woman places a pair of AirPods into her ears, letting her roam around the apartment as she pleases; she can glance at the suitcases as she assures him they’re packed. We might not know anything about the ex-lover aside from what we can glean from eavesdropping on a phone call, but Swinton’s character takes us on a rollercoaster of emotions. And while she doesn’t have the limits that would come with a landline phone, it feels just as restrictive as she paces and experiences the five stages of grief over her own relationship; even she doesn’t seem to know what she wants from him.

On its own, The Human Voice is a captivating one-woman show, one that highlights the strengths in what makes both Swinton and Almodóvar films work. But right now? Watching how seeing a woman isolating herself and being all the more affected by it plays out can be downright cathartic.

The Human Voice is playing at select theaters beginning March 12.