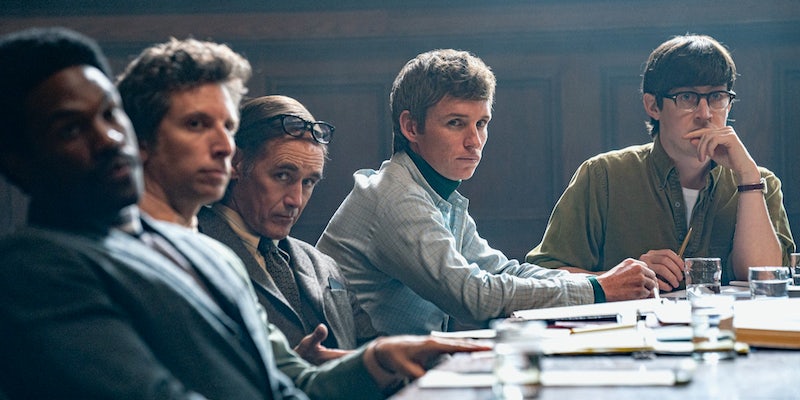 The Trial of the Chicago 7 is a roller coaster of a film. Aaron Sorkin’s courtroom drama is high on the dramatics as one would expect from both a high-tensioned biographical drama and a dialogue-heavy script from Sorkin. The ridiculousness contained within its high-stakes drama came out of the real-life trial the movie spends much of its time depicting, one in which federal prosecutors sought to convict eight men with conspiracy and crossing state lines to incite a riot at the 1968 Democratic National Convention in Chicago.

The Trial of the Chicago 7

RELEASE DATE: Oct. 16, 2020
DIRECTOR: Aaron Sorkin
STREAMING: Netflix
An all-star cast leads Aaron Sorkin’s effort to bring the stories of the men who were arrested during the 1968 Democratic National Convention and charged with inciting a riot—and the absolute circus of a trial that followed.

Both entertaining and infuriating, The Trial of the Chicago 7, like many recent releases, has a keen sense of depicting a story that’s conversing about both then and now. And while Sorkin’s script can get caught up in its own hangups, a stacked cast elevates the material to make it a real crowdpleaser.

The version of the late ’60s that Sorkin depicts is one full of contradictions and politics, especially in revolutions. The audience is quickly thrust into the film with a montage of the events that led to the 1968 DNC and introduced the men at the center of the trial, many of whom have vastly different ways of approaching similar goals. Tom Hayden (Eddie Redmayne) and Rennie Davis (Alex Sharp), who were part of the Students for a Democratic Society, made a point to stress that their protest was peaceful. Yippies Abbie Hoffman (Sacha Baron Cohen) and Jerry Rubin (Jeremy Strong) were ready to embrace the spectacle. David Dellinger (John Carroll Lynch) was a pacificist and conscientious objector who assured his family before leaving his home. And Black Panther Party Chairman Bobby Seale (Yahya Abdul-Mateen II) only planned to be in Chicago long enough to make a speech for a large crowd.

Sorkin then fast-fowards to several months after the protests with a new administration—and a new Attorney General—in tow. President Lyndon B. Johnson’s Justice Department didn’t want to pursue charges, but Attorney General John Mitchell (John Doman) did and ordered lead prosecutor Richard Schultz (Joseph Gordon-Levitt) and U.S. Attorney Thomas Foran (J.C. MacKenzie) to convict them. Sorkin’s script suggests the move was partially a way to get back at his predecessor Ramsay Clark (Michael Keaton) for waiting too long to resign his post, revealing the first of many conspiracies that unravel in.

We won’t find out how those protests played out until much later in the film. By then, the defendants and their defense attorneys William Kuntsler (Mark Rylance) and Leonard Weinglass (Ben Shenkman) have sat through weeks of a farce of a trial with Judge Julius Hoffman (Frank Langella), who seems to view every single person on the defense team with contempt. Throughout the judge hands out contempt of court charges to the defendants so often it’s almost like he’s handing out candy instead. You’re just as frustrated with how it’s playing out as the defendants.

It doesn’t seem to matter what kind of objectsions that Kuntsler makes. It doesn’t matter how much Seale repeatedly points out—with Abdul-Mateen II capturing Seale’s exasperated anger—that he is being tried without representation (Seale’s lawyer was getting his gallbladder removed) and that he wasn’t even involved with the protest that took place; the judge denies Seale’s request to represent himself and says just to use Kuntsler as his attorney since he’s right there. At one point, he orders Seale to be literally bound and gagged to get him to stop interrupting the trial, which results in a mistrial. The judge ignores valid points made by the defense, continually threatens Kuntsler, whose anger is never far from the surface (something that Rylance embodies fully), and refuses to let the jury hear relevant testimony from a key witness.

In perhaps the film’s showiest performance, Baron Cohen embraces the chaotic energy of Abbie Hoffman, who uses the trial as a stage in moments that bring levity to the heavy subjects; in interludes, Hoffman takes the stage at sold-out college campus shows that’s both a standup comedy act and commentary for the movie-viewing audience. His whole schtick mostly clashes with Redmayne’s buttoned-up Hayden, who mostly wants to keep his head down; Hayden wants to enact change through changing policies and elections, which goes against the more showy activism of people like Abbie Hoffman and Rubin—a clear commentary on the state of progressive activism and policies today.

It’s a political trial, Abbie Hoffman says out early on, referencing the chanting of protesters who cry that “the whole world is watching.” And even before that trial starts, Davis tallies the names of every soldier who died in Vietnam because with the circus of the trial on the horizon, “it might get easy to forget who this is about.” For some of them, it’s bringing attention to the cruelty of unjust powers who have no problem with sending young men to a war they shouldn’t be part of and be killed for it—and those in power shutting them down for their dissent.

Sometimes, Sorkin’s script forgets who this is about as it gets caught up in the theatricality. Some of the characters feel more like archetypes than people; two of the eventual seven defendants are mostly there so that the jury can feel good about acquitting them for being overcharged. Even if you don’t know how the trial ends, we notice the same tropes play out.

On the other hand, Steve McQueen’s Mangrove, another film that touches on the power of protest and the police state that tried its damnedest to shut it down a little after the Chicago Seven’s trial, makes its centerpiece trial more about the people. They’re both highlighting systemic injustices, but they each go about it in different ways; Mangrove’s version is more effective.

But what The Trial of the Chicago 7 really hammers home is how much it recognizes the familiarity of the situation it’s portraying. Because when our current justice system features calls to charge protesters, cops who don’t wear their badges or nametags when enacting violence, and an attorney general whose actions are fueled by politics, you can’t say that you’ve never seen it before. It’s happening right now.

The Trial of the Chicago 7 is now on Netflix.