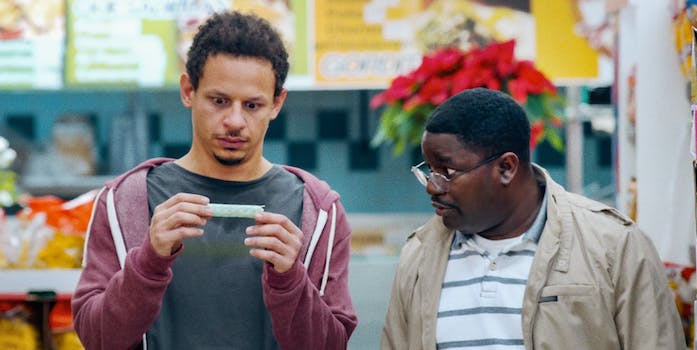 It’s been a long road for Bad Trip, Eric Andre’s prank movie: It was supposed to debut during SXSW 2020, and before that it was allegedly going to be released in late 2019. I started to wonder during my viewing if when Bad Trip was initially filmed, people really didn’t recognize Tiffany Haddish.

Co-produced by Jackass’ Jeff Tremaine and written by Andre and his longtime Eric Andre Show collaborators, Bad Trip funnels scripted dialogue and hidden-camera pranks into a road trip movie, much like Borat Subsequent Moviefilm and Bad Grandpa. The trip starts off in Andre’s home state, Florida, as Chris (Andre) talks best friend Bud (Lil Rel Howery) into driving to New York City to profess his love for high school classmate Maria (Michaela Conlin), after running into her at his job. Chris becomes obsessed with Maria, and he misinterprets her kindness for something else, but this “romance” storyline should have been nixed completely, especially since Bad Trip is supposed to be about Chris and Bud’s friendship.

That friendship is complicated when Bud’s sister, Trina (Haddish, stealing every scene), escapes from prison and starts looking for her beloved car, which Bud has taken. If you’re a fan of The Eric Andre Show’s on-the-street pranks you’ll find that same buzz here: Within the movie’s first 10 minutes, Andre is stripped naked by an errant car vacuum. Bad Trip does try to push the envelope a little more. In a later scene, Andre is sexually assaulted by a gorilla at the zoo as horrified onlookers stand by. It’s a disgusting scene, made somewhat humorous only because everyone is filming the incident on their phones.

It’s refreshing to see a prank movie with a Black cast, though there are certain moments when you grow concerned confusion will turn to violence—Andre said in 2019 that he and Howery had a knife pulled on them during the Chinese finger trap prank—as well as moments where you wonder how “in” on the joke their marks are.

Andre has a formative history with pranks, and he typically excels at defusing situations by appealing to people’s emotions—while heightening the weirdness. Unfortunately, the chaotic energy of his show and his standup is missing here.