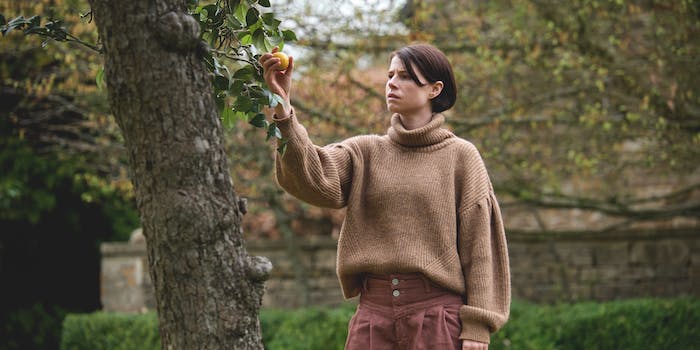 Writer-director Alex Garland relishes exploring the infinite space between reality and fantasy. In 2018’s Annihilation, the further its characters venture into the Shimmer, the more we question what we see actually happened. The 2020 miniseries Devs involves simulations and a system that purports to be able to predict. Even Ex Machina puts that tug of war center stage with a programmer tasked with testing a humanoid robot’s capability of independent thought.

Release Date: May 20, 2022
Director: Alex Garland
Release: Theatrical
After the sudden death of her husband, a woman rents a centuries-old mansion in the English countryside where she’s haunted both by her memories and a mysterious stalker. In some ways, it’s Alex Garland’s most straightforward film to date while it loops in a vast array of intriguing and mystifying visuals.

Looping in Biblical, mythological, and pagan imagery alike, Men mostly takes a straightforward approach to its brand of horror. A vaguely threatening man can be terrifying enough for a woman traveling alone in an area with which she’s not familiar. That’s before you loop in Garland’s trademark talent at portraying a different kind of body horror than we’re used to seeing, and Men has enough of that to spare. While that approach has mixed returns, it’s also an effective showcase full of ethereal images—heightened further by a dazzling and haunting score from frequent collaborators Ben Salisbury and Geoff Barrow—that will long stay with viewers.

For Harper (Jessie Buckley, able to encompass quieter moments and palpable rage with ease), a trip to the English countryside for an extended stay in a 500-year-old mansion isn’t. Instead, it’s an escape, the first thing she’s doing for herself after the death of her husband James (Paapa Essiedu). The events leading to his death are revealed through several flashbacks in their London flat dowsed in an almost eerie orange hue. Harper is aware that it’s not her fault, but it still affects her; she’s still not sure exactly what happened, and Garland doesn’t relay those answers either. “I don’t know if I’m tormented,” she says to another character who suggests that James’ death haunts her.

Her home for the next two weeks is idyllic, both in terms of the isolation Harper craves and the ingredients that make it catnip for the horror genre. It’s in the middle of nowhere, it’s several hours away from her closest friend Riley (Gayle Rankin, mostly appearing through FaceTime), and the WiFi’s spotty. The mansion is surrounded by lush woods, the greens popping on the screen in vast contrast to London’s orange tones, which would be easy for anyone to get lost in the environment. The main lifeline in her temporary home is Geoffrey (Rory Kinnear), the mansion’s owner who lives in a cottage nearby and whose eager-to-please manner is rife with probing questions.

At first, it’s the kind of reprieve for Harper that makes you forget that you’re watching an Alex Garland movie: She explores the house and the nearby forest on foot, revels in the greenery, and plays around with echoes in a tunnel that create haunting harmonies later incorporated into the score. But as the melody surrounds her, a man appears at the other end and follows her home, and two things are apparent: He’s naked, and he’s also played by Kinnear.

The further we get into Men, the more invasive of a presence Kinnear, who plays all but one of the male characters in the film, becomes. He’s a bumbling landlord, a naked voyeur who starts to adorn himself with greenery, a cop who dismisses Harper’s concerns, every patron and employee in a local pub, and a local vicar; in one case, Kinnear’s face is grafted onto the face of a much younger character. In pretty much every case, Kinnear’s many characters embody the worst kinds of toxic masculinity.

They’re stalking her, terrorizing her, gaslighting her, calling her a bitch when she refuses to put herself in an uncomfortable situation to please a stranger, and one of Kinnear’s characters goes as far as to blame James’ death on Harper. These men have the worst kinds of impulses that are all too familiar in a normal setting. And Kinnear is so adept at it all that it’s easy to lose sight of him when he takes control of the screen.

Men’s horrors are enhanced by its surroundings, both the kind captured by Rob Hardy’s cinematography and the score. When Harper visits a local church, the camera lingers on a two-sided carving—one depicting a Green Man, the other a sheela-na-gig; they’re only among some of the motifs that Garland returns to over and over again. But it’s just as interested in more typical Biblical visuals—Harper’s temporary home feels a bit like Eden until the moment it doesn’t—and even finds a way to loop in references to major mythological figures.

Whatever type of mythology Men taps into, it’s sometimes lost in a final act that’s aimed to be mystifying and provocative and might require a few watches to soak in the finer details; fortunately, Buckley and Kinnear are fully game to bring that to life. But even when some of Men’s larger points are perfectly tangible, Garland is happy to let other aspects linger in more ambiguous territory. Not every single aspect always works, but in the end, it makes for a more interesting film.

Men will arrive in theaters on May 20.