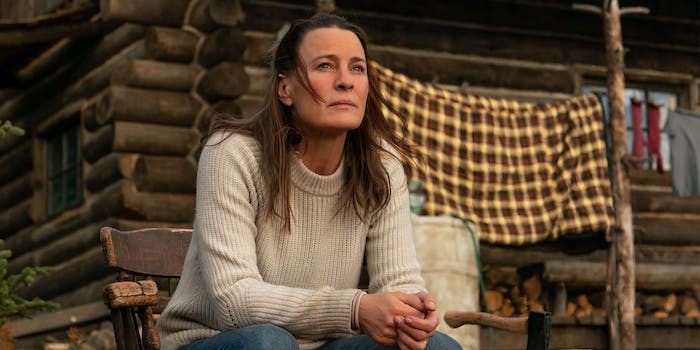 ‘Land’ is a gorgeously shot film with an emotionally hollow story

Robin Wright directs herself in this often bleak drama.

On the surface, the pieces that Land, Robin Wright’s feature directorial debut, is made up of are familiar to us. It’s a tale of how all-encompassing and unspeakable grief can overwhelm and how to finally let someone in again. It’s a survivor’s tale in the wilderness—albeit one that’s somewhat self-inflicted—that gives Wright, who also stars in Land, the opportunity to show off her full range. It’s gorgeously shot to boot, thanks in part to cinematographer Bobby Bukowski.

RELEASE DATE: Feb. 12, 2021
DIRECTOR: Robin Wright
STREAMING: VOD
Overcome by grief after a great loss, a woman cuts herself from the outside world and moves to a cabin in the Rocky Mountains, where it immediately becomes clear that she’s in over her head.

But for all of the emotional heartstrings that Land attempts to pull, it never goes much further than that surface level. Wright and Demián Bichir both give fine performances, but with a script that can feel both small and emotionally manipulative, it never quite lands.

When we first meet Edee (Wright), she’s emotionally stunted. Her husband and son died; we won’t learn the details until much later. It happened long enough ago that Edee thinks her friends and family want her to have moved on, telling a therapist, “I’m feeling that it’s really difficult to be around people because they just want me to be better.”

Whether or not that’s actually the case is unclear—we’re not given much insight into Edee’s life prior to her planting herself in the middle of nowhere. Even if that is the case, Edee has more or less disassociated and closed herself off from everyone in her life, including her sister Emma (Kim Dickens), who is worried about Edee potentially causing herself harm.

Behind the Seams: Why Does Every “Dead Wife” Look the Same?

Edee decides to live off the grid in a cabin that doesn’t even have a toilet attached to it, an act that seems to worry just about everyone who learns about it. It’s not the act itself that concerns others, but the way she goes about it: She tosses her phone into the trash, she pays someone to take her rental car down, leaving her without a car and effectively stranded in the mountains. Edee is clearly in over her head (she’s inexperienced in many of the survival skills she’d actually need to live fully off the grid), but she also doesn’t seem to care what happens to her. When she isn’t trying to live day by day, she’s haunted by the memories of her husband and son, who operate more like specters than living memories.

Before Miguel (Bichir) shows up to save Edee from the brink of death, Wright puts herself through the wringer in a series of clichéd “anything that can go wrong will go wrong” scenarios, many of which she’ll have the chance to rectify later on: Her rifle is so frozen that it won’t shoot, she can’t chop wood properly or start a fire, a bear rummages through her home (and a good chunk of her remaining food) while she’s trapped in the outhouse. (She even admits to herself in frustration that “this isn’t working.”)

Bichir’s presence brings some much-needed levity to Land. Even as he promises not to relay information about the outside world to her, he slowly shares small slices of his life. They share jokes, trade barbs, and realize they have more in common than they first thought. Soon enough, Miguel slowly chips away at the icy wall that Edee set up. It’s the kind of thing we’ve seen many times before.

While overall, it’s a welcome addition to a film that often felt bleak before, it’s a bit hamfisted in its execution. It also lends itself to a third act that’s meant to tug at the heartstrings but instead feels emotionally hollow.

Land is now available to rent on VOD.