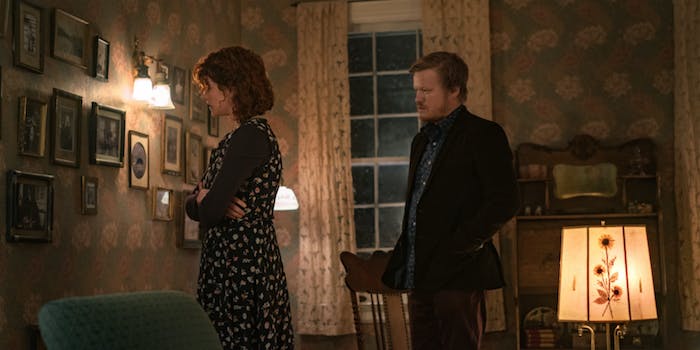 ‘I’m Thinking of Ending Things’ plays with your mind, but not your heart

Charlie Kaufman's adaptation is a strange trip, but it doesn't make you feel much.

“Where is this going?” takes on multiple meanings in I’m Thinking of Ending Things, Charlie Kaufman’s latest film. It’s a curious meditation on the breakdown of a relationship, or a mind, or both.

The film, written and directed by Kaufman, follows the beats of its source material: Iain Reid’s 2016 book of the same name, which tracks a couple to a parental meet-and-greet at a remote farmhouse. It’s narrated, ostensibly, by a woman, and Reid is meticulous with backstory. There’s not much of that here: Kaufman instead goes wild with dialogue.

The underlying condition is a relatable one: A young woman (Jessie Buckley, credited as just “Young Woman”) has been dating Jake (Jesse Plemons) for a little over a month, but something just isn’t clicking. She’s got the ick, and is working up the nerve to break up with him. For the first 30 minutes, it’s just the two of them, driving along a bleak, snowy road. She recites a long poem. He discusses musicals. In the book, the narrator isn’t named. Here, she’s called Lucy, and later, possibly Louisa? She’s a poet, or maybe a painter? Another 30 minutes is devoted to a surreal dinner with Jake’s parents, a perfectly cast Toni Collette and David Thewlis, adding to the discomfiting narrative. Cinematographer Łukasz Żal (Cold War) keeps its glacial, at times producing the effect of a surveillance camera, which ties into one of the book’s lingering questions: “How do we know when something is menacing?”

That applies to Jake. He’s a “Well, actually” guy with a deep well of insecurity. There are hints of Plemons’ toxic character from Black Mirror’s “USS Callister” episode, but the broken man has been a fixture of every Kaufman-penned film, from John Cusack’s misanthropic, desperate artist in Being John Malkovich to Jim Carrey’s depressive nice guy in Eternal Sunshine of the Spotless Mind. Here, Buckley is the film’s commanding (and, perhaps, broken) force. She takes Kaufman’s existential data and gives it some shape and warmth. Still, though they have a lot of conversations, we don’t know much about either of them.

That’s driven home by an in-car critique of John Cassavettes’ 1974 film A Woman Under the Influence. After Jake chides her for drinking too much wine at dinner, the young woman subtly inhabits Gena Rowlands’ troubled Mabel Longhetti—she’s suddenly smoking a cigarette—and trounces on Jake with her review. But her words aren’t her own; they’re pulled from Pauline Kael’s withering New Yorker review of the film. “Mabel fragments before our eyes,” the young woman says, quoting the critic. It’s a very Kaufmanesque exchange, as is her earlier comment about “fake crappy movie ideas,” but what is it actually telling us about her, besides that she might be Mabel in this situation?

Another Kaufman-penned film, Adaptation, illustrated the mental slog of adapting someone else’s work. While he adds a little levity and humor to Reid’s well-crafted thread of dread, the last 30 minutes start to drag. For a film about alleged endings, its denouement is disjointing. It smartly deviates from the book’s much darker ending, but it still fails to do the essential work: Making you feel something for these characters.