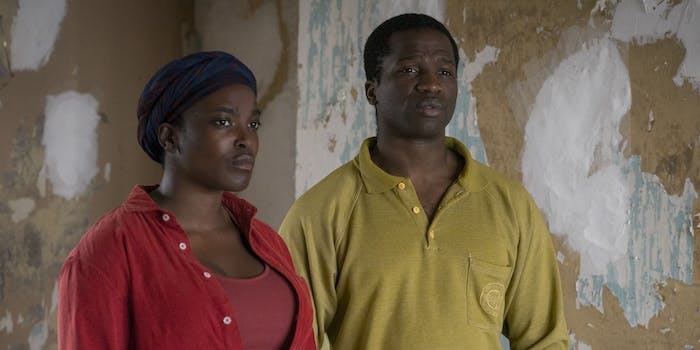 Have you been sleeping on Netflix’s best horror new movie, ‘His House’?

Netflix released a ton of horror media for this year’s Halloween season, but its best new movie flew under the radar: a British indie film called His House. While Rebecca and The Haunting of Bly Manor hogged the spotlight, His House quietly earned rave reviews. (Rotten Tomatoes may not be a fool-proof metric, but this film’s 100% rating sends a pretty clear message.)

RELEASE DATE: Oct. 30, 2020
DIRECTOR: Remi Weekes
STREAMING: Netflix
After surviving a perilous journey from South Sudan to England, refugee couple Bol and Rial make their way through Britain’s grueling immigration system, only to discovered that their new home is haunted by spirits from their past.

Written and directed by newcomer Remi Weekes, His House is a horror story about two South Sudanese refugees who make their way through Britain’s grueling immigration system, only to discover that their new house is haunted by terrifying phantoms of their past. Sope Dirisu (Gangs of London) stars as Bol, with Wunmi Mosaku (Lovecraft Country) playing his wife Rial, delivering a pair of compelling, emotionally charged performances in a well-observed drama about the refugee experience.

Like so many great horror stories, His House draws connections between supernatural peril and real-life fears. The lead characters are traumatized after fleeing their home country, and later by their dangerous journey to Britain. They lost their daughter Nyagak while crossing the English Channel, and when they reach England, they’re locked up in a detention facility. The film’s first act does an incredible job of building up all the obstacles in Bol and Rial’s path, as they’re ushered into their new home by a perfectly-cast Matt Smith (Doctor Who). With his blokey accent and trying-to-be-relatable attitude, he’s an irritatingly clueless presence in their life, announcing that they’re lucky to move into a filthy house with faulty electricity and peeling wallpaper.

The immigration officials basically abandon Bol and Rial to fend for themselves in a new country, offering nothing but a box of food and a laundry list of rules: no candles, no parties, no visitors, and definitely no applying for jobs. Their only permitted income is a tiny government stipend. Along with suffering from PTSD, they’re forced into a tragicomic conundrum: As new immigrants to the U.K., they’re expected to assimilate into British society without having any of the tools to do so. And as the days wear on, it becomes clear that they’re not alone in their new house.

Without going into spoilers, His House works impressively well on multiple levels. In terms of pure horror, Remi Weekes goes all-out in terms of creepy ghosts, ominous camera work, and well-timed shocks. The production design and lighting are fantastic, achieving a balancing act between a depressingly realistic British council estate and the supernatural threats inside the house, interspersed with brief moments of beauty like Bol and Rial sharing a quiet dinner together. And on a conceptual level, the film really digs into the idea of ghost stories as a physical manifestation of grief and trauma. His House is easily one of the best horror movies of 2020, deserving far more attention than some of Netflix’s flashier fare.