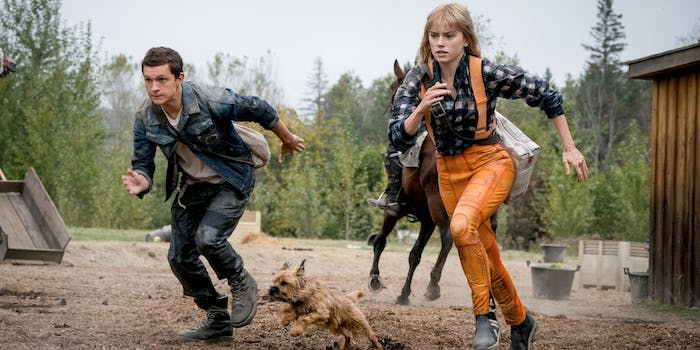 Tom Holland and Daisy Ridley star in this long-delayed YA adaptation.

After two years of reshoots, delays and behind-the-scenes issues, Chaos Walking is better than I dared hope. Adapted from a YA novel by Patrick Ness (who shares a screenwriting credit with Christopher Ford), this sci-fi thriller departs from the source material without being a total fiasco like Disney’s recent Artemis Fowl adaptation. So while die-hard fans may be disappointed, Chaos Walking still works as a mid-range teen blockbuster of the Hunger Games variety.

RELEASE DATE: March 5, 2021
DIRECTOR: Doug Liman
RELEASE: Theatrical
Adapted from the acclaimed YA sci-fi novel ‘The Knife of Never Letting Go,’ this thriller stars Tom Holland and Daisy Ridley as a pair of human settlers on an alien planet, clashing with a manipulative leader played by Mads Mikkelsen.

Tom Holland (Spider-Man: Homecoming) and Daisy Ridley (Star Wars) star as Todd and Viola, a pair of human settlers on an alien planet. Todd has lived there his entire life, in an all-male settlement led by the ominous Mayor Prentiss (Mads Mikkelsen, wearing an incredible fur coat). Viola is a recent arrival, the sole survivor of a scouting ship for another batch of colonists. Directed by Doug Liman (The Bourne Identity), Chaos Walking makes significant changes to the source material while retaining the most important worldbuilding: All the women in Todd’s settlement are dead, and the surviving men are beset by a life-changing affliction known as “Noise.”

When the colonists first arrived, every man began to broadcast his thoughts out loud in a telepathic stream of consciousness. Some, like Mayor Prentiss, can control their Noise and use it to manipulate others. Todd, however, is too young to achieve this level of emotional control, constantly leaking his thoughts and feelings. In the novel, this disturbing concept invites thorny questions about consent, secrecy, and the impact of growing up in a society where lying is virtually impossible. But it’s understandably hard to translate to the screen.

Liman’s solution is to combine misty CGI imagery with voiceovers, which doesn’t work especially well. We constantly see and hear the men’s thoughts, but voiceovers are largely dull and hard to make out. Within the first few minutes, I was already bored of hearing Todd state the obvious about stuff we’re already seeing onscreen. But once the true impact of the Noise becomes clear, things get more interesting.

Tom Holland is well-cast as a vulnerable, messed-up teenager who struggles to keep his thoughts in check, perpetually humiilated by his own mind. Which is, let’s face it, a very evocative allegory for adolescent mood-swings. Despite being raised in an culture stewing with toxic masculinity, he’s a decent kid who immediately sympathizes with Viola when he finds her in the forest; the first girl he’s ever met. We know instinctively that things won’t go well if Mayor Prentiss’s men get their hands on her, and while sexual assault isn’t a factor in this kind of PG-13 blockbuster, the sense of threat is overwhelming. Daisy Ridley is, of course, thoroughly engaging in this rather simple role, making you wonder why she hasn’t landed better work in her post-Star Wars career.

An interesting power balance plays out between Todd and Viola. He has excellent survival skills, but his upbringing made him very naive. He’s torn between a desire to help Viola escape, and a craving for recognition from Mayor Prentiss, whose aggressive leadership makes him a more compelling role model than Todd’s well-meaning dads (Demián Bichir and Kurt Sutter). Meanwhile, Viola has a better understanding of human nature and grew up on a sophisticated spaceship. But she’s totally unprepared for what she finds on the colony planet, where she’s viewed as a suspicious outsider due to her lack of Noise.

Chaos Walking benefits from distinctive production design and costumes, contrasting Viola’s bright orange space outfit with the rural grunge of the menfolk. Alongside the strong trio of lead actors, these elements go a long way to bolster an overly simplified story. There are some rather obvious attempts to echo The Hunger Games (another Lionsgate YA adaptation), both in visual style with the outdoor action sequences, and the hints of twangy Americana in the soundtrack. Like many Hollywood tales about space colonization, Doug Liman emphasizes Wild West imagery: cowboy hats, fire-and-brimstone Christianity, small-town rivalries, etc.

This creates some awkward thematic clashes because the planet is already home to an alien race—a detail that gets very little screentime. We’re meant to sympathize with the (predominantly white) human settlers in their quest to “find a new home,” but their arrival is blatantly destructive. You’re probably better off not thinking too hard about this, much like how the film shies away from the darker impact of the Noise.

Released mid-pandemic with far less buzz than big-name blockbusters, Chaos Walking is doomed to sink into obscurity. But if you like the sound of some not-too-schlocky thrills featuring well-chosen roles for Daisy Ridley and Tom Holland, it’s worth checking out once it’s available on home release.

Chaos Walking arrives in IMAX theaters on March 5, with VOD release to follow.