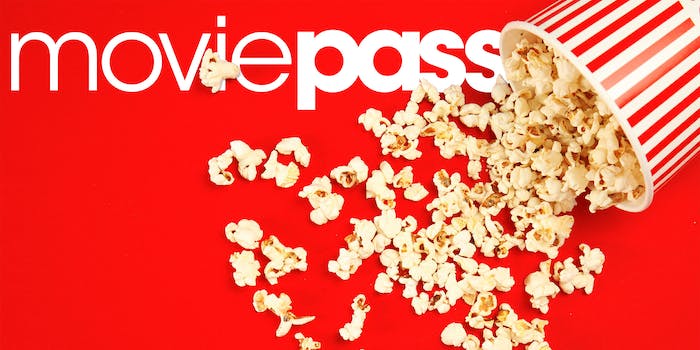 The sad truth about MoviePass

Not every industry is meant to be disrupted.

It appears that MoviePass is dying. At the very least, it’s on life support, as many customers are reporting problems with the service, including surge pricing, app errors, and, in some cases, a complete lack of available screenings. It seems highly unlikely that the $5 million loan floated to the company last week will be enough to keep the MoviePass in business much longer, as analysts put the company’s monthly losses at $10 million.

MoviePass is charging an $8 surcharge on a $6 ticket at the Los Feliz 3. This app seriously has brought me so much joy with its zany mathematics that I’m tempted to pay. pic.twitter.com/wq2Fk1YqzR

From the very beginning, the service seemed too good to be true: You pay a flat monthly fee and you get to see all the movies you want. In recent months, MoviePass has proven suspicions correct. The once flat monthly fee now comes with surge pricing, blackouts, and other strange, seemingly random stipulations. The money to cover its low price point had to come from somewhere, and it seems that somewhere was investors’ pockets.

The failure of MoviePass speaks to a broader truth of our cultural moment: Not every business is meant to be disrupted.

Our current era of app-based technological innovation can be broadly described as “The Uber of Everything.” Uber has disrupted taxis by offering a cheaper alternative. Airbnb has done something similar to the hotel industry. Blue Apron has done it with grocery stores. The list goes on and on. Everyone is trying to offer something you use all the time more conveniently and cheaply with an app.

Success in these endeavors often happens for one of two reasons. In the case of Uber and Airbnb, there is an industry that abides by a laundry list of government regulations, and in return, they have been given control over an industry. The disruptor ignores these regulations. By skirting the rules, these companies can undercut the competition. Uber can treat its employees as independent contractors; those employees aren’t obliged to follow the rules that govern taxis like special insurance and livery tags. Airbnb violates zoning ordinances and hospitality industry laws in every city in which it operates. These companies eschew things like taxi medallions and hotel licenses and pass the savings on to you.

Blue Apron’s competitive advantage is a bit less nefarious (though it’s had its problems). You pay a fee to avoid having to look up recipes and pick up ingredients from the grocery store. And you get just the amount of ingredients you need. Services like Blue Apron sell convenience. As long as a customer will pay $20 to avoid shopping, the company can make money. Seamless and GrubHub are two other notable purveyors of convenience that seem to be doing just fine.

MoviePass’ business model doesn’t have any such competitive advantage. MoviePass began as $50-a-month service for unlimited trips to the movie theater. At that price point, it was a boutique service for cinephiles: not the kind of growth potential Silicon Valley investors are looking for. Last year, the service dropped its fee down to $10 a month, and the company grew by 2,300 percent in six months.

How does MoviePass get out of the red with an annoyed customer base and business model that loses money? So far, it’s tried and failed at a number of other revenue streams, and the company might just be out of ideas.

A theater manager who asked to remain anonymous confirmed to the Daily Dot that its theater receives a payment for the cost of any ticket sold through MoviePass at face value. The source added, “[Moviepass] originally wanted theaters to give them a cut of concessions because MoviePass brings in business, but all the theaters said ‘No.’ To be honest, I have never seen an increase in concessions sales from MoviePass anyway.”

MoviePass does collect data, but it seems that “what movies people watch” isn’t data enough to draw in significant revenue. MoviePass has boasted about marketing contracts with studios based on its data, but it clearly hasn’t led to enough business to keep the lights on. The company’s attempts to bury Red Sparrow and promote the Razzy-destined Gotti were met with suspicion and derision.

One potential model for a subscription-based model is AMC Stubs A-list. With AMC’s app, subscribers can see three movies a week for $20. However, this is more like a loyalty program than Uber-style disruption. The value proposition for AMC is as old as frequent flier miles or shopper loyalty cards: You give customers a discount if they pledge loyalty to your brand. Arclight Cinemas and a number of other theaters offer discounts for repeated purchases, and this subscription model is basically a discount card on the front end.

MoviePass seems to be backed into a corner. It doesn’t own movie theaters, so there is no brand loyalty for it to leverage. The company doesn’t have a way to get discount tickets from theaters because theaters don’t want to give them up. Concessions, data, and content distributions are all areas with a big barrier to entry and a ton of competitors.

Frankly, it looks like MoviePass entered a space where it knew it would lose money. It seems like MoviePass hoped it could either scale so large that they could force theaters to pay in or split concessions or it would stumble into another profit-generating business along the way.

The lesson of MoviePass is one that we’ll likely see played out in a number of sectors in the coming years: don’t disrupt something unless you have something to disrupt.

If the company were to collect more data than just movie preferences, it would be hard to imagine privacy advocates sitting idly by. Facebook, which comes by its data far more voluntarily, has been under the microscope for data peddling. MoviePass CEO Mitch Lowe was so cagey about the company’s use of data in a recent NPR interview that he found himself walking back his statements while he made them:

“And that’s why companies like ours have to be very, very clear on what we’re doing with the data. And we’ve said this over and over again. We are not selling the data. We’re only using the data that we know about you to give you better experiences. But you can always opt out or you can cancel our service at any time. That’s why it’s so great to have options.”

Tickets, concessions, and data aren’t going to be enough, but MoviePass has also claimed it’s getting into the content business! MoviePass Ventures, an acquisition arm of the company, went to Sundance in hopes of acquiring films to show at MoviePass-only screenings. Though it picked up the heist film American Animals, the company failed to make waves, and with so many companies getting into the content game, it’s hard to imagine what MoviePass could do to become a player while the company is hemorrhaging money.

To be [somewhat] fair to MoviePass, the first entrant into a space often fails, but it’s hard to see how a successor to MoviePass could work. There is no sign of profit anywhere on the unlimited movie theater subscription horizon.