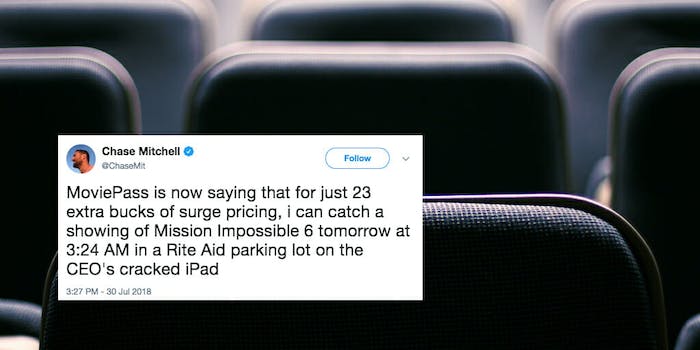 PSA: It's a bad time to sign up for MoviePass.

The future of MoviePass is looking bleak, to say the least. Over the weekend, subscribers to the cinema ticket app weren’t able to secure tickets for Mission Impossible: Fallout or most other big movies. And on Monday, Business Insider reported that it appears MoviePass won’t provide tickets to major film releases for the foreseeable future.

Across social media, MoviePass users shared screenshots that showed the app out of service or offering very limited ticket options, even in big cities. Even more alarmingly, the MoviePass Twitter feed had stopped responding to customer concerns as of Monday afternoon, according to Mashable.

All in all, it seems the downfall of MoviePass is imminent. Of course, amid the crashing and burning, the people of Twitter rolled out the jokes.

a live look at the moviepass offices pic.twitter.com/Ib08nNd9S1

Hey moviepass I just tried to check in to see a movie and I got this notification can you tell me what’s up pic.twitter.com/zBPyxsEQ0f

MoviePass is now saying that for just 23 extra bucks of surge pricing, i can catch a showing of Mission Impossible 6 tomorrow at 3:24 AM in a Rite Aid parking lot on the CEO's cracked iPad

buying myself a moviepass cap so that I can one day explain to my grandkids how I passively participated in the greatest grift of my generation pic.twitter.com/UHtI3C8erS

Among the mockery, only one person valiantly offered to help the struggling app (in a riff on a classic meme).

I PLEDGE TO WORK FOR FREE for any movie theater to help secure MoviePass. I am a 29 year retired veteran, Infantry Sergeant Major, U.S. Army Ranger with combat experience. I have a conceal carry, Primary and Alternate side arms, an AR-15, and all necessary tactical gear. pic.twitter.com/RqRLWelFSh

And despite the chaos, people suggested other products they’d like to pay for using the subscription-based MoviePass business model.

Idea: Moviepass, but for healthcare

If MoviePass really is on its way out, one thing’s for sure: The cheap movies were nice while they lasted.

I got MoviePass for Christmas, and I've seen about $150 of movies on it, so the gift was worthwhile, but the amount of entertainment I've gotten following their insane and terrible business model – essentially "let's lose a fortune for no reason" – is priceless.