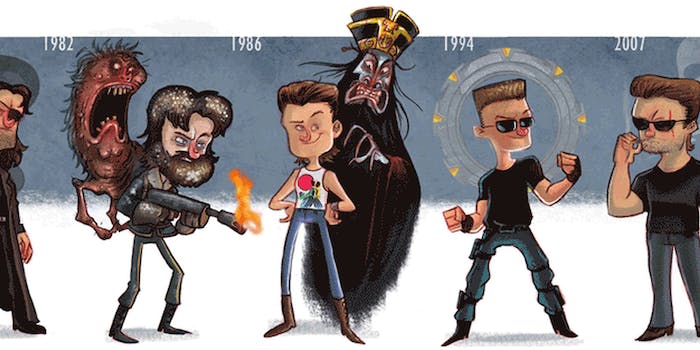 The Morning GIF: The evolution of Kurt Russell

This GIF brings the B-movie star's impressive résumé to life.

There is cool, and then there is Kurt.

All iconic characters, thanks to one man: Kurt Russell, mullet-headed, acid-washed god of the modern B-movie. Besides possessing a backside that resembles two volleyballs, he’s got a self-aware charm and sense of humor that lend a certain je ne sais quoi to his portrayal of, say, a 20-watt truck driver fighting off an ancient Chinese demon, even while delivering the corniest of lines. “I was born ready,” anyone?

This GIF of the Kurt Russell movie hero timeline is a cult phenomenon in its own right, liked by 54,000 on Facebook, and even 4,600 on Google+. Starting with the immortal Snake Plissken from Escape from New York (and L.A., but nobody talks about that one) through The Thing, Big Trouble in Little China, Stargate, and Grindhouse, it features his greatest characters. The GIF is by ABVH, who is something of a genius at animating existing material to add meaning, not just motion. The original artwork is by Jeff Victor and was posted on his blog Wicked Crispy, where he says: “I’d like everyone to take a minute to think about how awesome Kurt Russell is. Why isn’t he in more movies?”