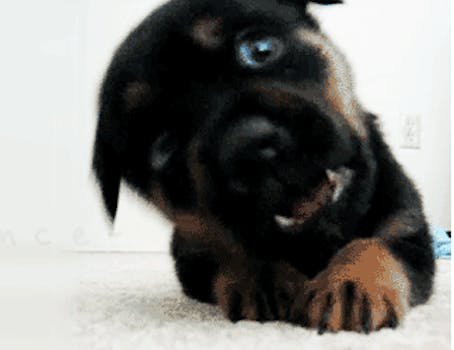 If only there was a real-world version of this animated GIF.

Press button, get puppy. Take a 30-second “awwww” break. Repeat as needed. Keep this GIF in your bookmarks; you’re going to want to come back to it frequently.

There’s nothing we like so much as a good setup, and this is one of the best we’ve seen. Suspense, risk, the do-I-really-have-to-do-it incredulity, followed by the glorious, cynicism-defeating payoff: it’s all here, and more.

Press button, get puppy. What could be simpler? It was posted to the AfternoonSnoozeButton Tumblr on May 10. The puppy part of the GIF seems to be watermarked “yourprince” but the yourprince tumblr is empty and the yourprince- tumblr has been deleted; the latter was, according to the Google cache, dedicated to “beyonce + cute things” so we’re assuming the puppy came from there. It wouldn’t be the first time a blue-eyed rottie pup strayed a little from his home, but it’s probably the first time in history one has gotten 37,646 notes on Tumblr.