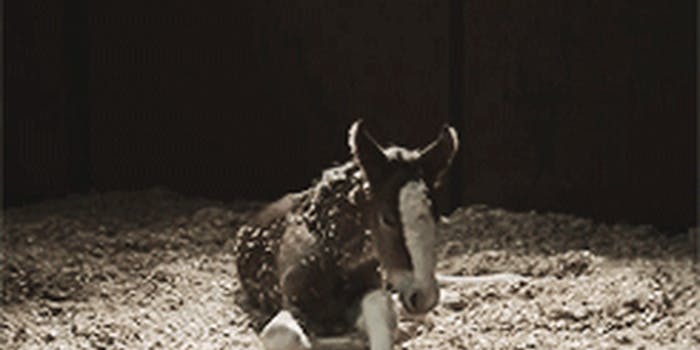 The Morning GIF: My little Clydesdale

“Damnit Budweiser, I was just wanting to watch football and pretend to be sociable. I was not prepared to be brought to tears.”

The Tumblr owner of Student Getting By spoke for many Super Bowl watchers when he posted that slightly outraged cri de coeur. Since 1933 the towering, flashy bays of the Budweiser team have been inspiring crowds at parades and public occasions all over the U.S. For the last 36 years, they’ve also been warming cockles and generating “awwws” in the now-iconic Super Bowl ads. This year, it could be argued that Budweiser won the Super Bowl, thanks to a six-foot, 180-pound Heathcliff and an 18-hand, one-ton Catherine.

This year’s touching tale of a tiny colt and the trainer who raises him was perhaps the crowd favorite going into the game, what with the advantage of tradition, taking the lead in a tough race among intimidating competition, and ultimately pulling away from the pack to romp home with the hearts of millions.

It didn’t take long for the entire 90-second ad to be turned into GIFs, and thanks to the fact that horses can’t talk, it hasn’t really lost anything in the translation. Created by the blogger at You Give Me Grasshoppers, this photoset has 22 notes in five hours, and is sure to get hundreds more, as soon as the horse lovers of North America finish the morning feed and check Tumblr.