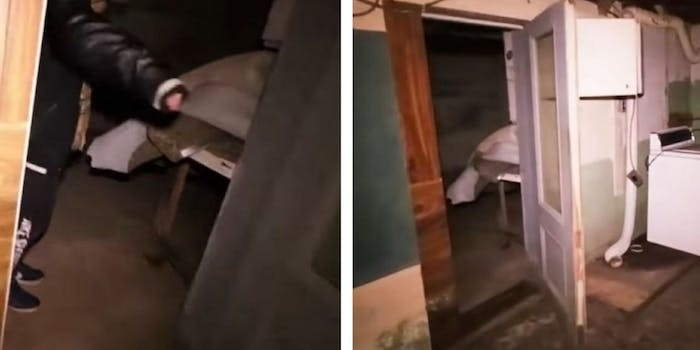 What is happening here?

A YouTuber named Moe Sargi who produces scary, paranormal content has apparently been exposed as faking a recent video. But now some redditors are concerned that it was all a setup to get Sargi even more exposure and YouTube subscribers.

On his channel, which has 1.5 million subscribers, Sargi visits haunted dwellings and films his reactions to his frightening surroundings. But in a video uploaded to a small YouTube channel called Perserving #1, it’s revealed how the scary social media sausage was made.

Before a door in the basement of a dilapidated haunted house supposedly opens by itself, it’s revealed that Sargi’s partner accidentally sets open the door a little too quickly. Sargi quickly cuts, tells the partner to wait for the right cue—“When I say ‘mental asylum,’ do it,” he instructed—and starts filming again. Then, when the door opens supposedly all by itself, Sargi does the requisite freakout and sprints up the stairs and out of the room.

The exposé video, which already had 100,000 pageviews as of this writing on a channel that only has 40 subscribers, redirects to a reuploaded video of the original vlog by Sargi—it apparently was deleted after he was “exposed” by the video on Perserving #1. In that video, Sargi mentions over and over again how scary the house is and how he’s by himself.

So, it was a fake, and Sargi—who now claims that he’s been hacked—apparently has been exposed.

But then commenters on social media asked whether the exposé was actually a setup by Sargi to bring more attention to himself. After all, the Perserving #1 video was at the top of the r/videos subreddit on Thursday morning, and tens of thousands of people had already watched it.

Or as one redditor sarcastically pointed out, “To be fair, it actually does make some sense if you’re open-minded enough and try to look at things from the other perspective for a moment. The illuminati were angry that Moe Sargi was getting a lot of subscribers way too quickly on YouTube, and they just couldn’t allow that to happen at any cost. So they hacked Moe’s social media accounts.”

On the latest video on Sargi’s channel, a masked man said a group called Project Zorgo forced Sargi to expose himself.

Whether you believe Sargi was hacked or whether he accidentally exposed himself in the unedited video—or if you believe this whole endeavor is silly and not worth your time—Sargi’s subscribers have begun to respond.

In the last month, Sargi usually adds between 900-1,600 new subscribers per day. But according to Social Blade, a YouTube social analytics site, Sargi lost 42 subscribers on Wednesday and a few hundred more so far on Thursday. If this is all an elaborate ruse to bring himself more subscribers, so far the plan isn’t working.